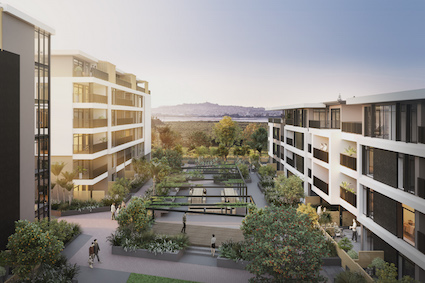 Work is expected to get underway soon on the first stage of a significant new residential neighbourhood of more than 1200 homes on the edge of the Manukau Harbour.

The 14-hectare master-planned Market Cove development in Favona next to Mangere Bridge will ultimately become home to around 4000 people.

Consisting of a combination of architecturally-designed terraced houses as well as apartments, the first stage will focus on the building of 38 two-storey terraced homes, and an apartment complex that will consist of 196 apartments within two six-storey buildings and one four-storey building.

Large common areas are set to be a key feature of the development. A central park of approximately 5000sq m is proposed to be used for sports and leisure adjacent to the community centre that will be available for public use and to host events.

A small retail precinct with cafes and convenience services near the central park will also support a weekend market space, and is expected to create a vibrant centre for the community to enjoy.

Market Cove general manager Guy Taylor says having refreshed earlier plans for the development, they’re excited to be in delivery mode now, with Market Cove not reliant on bank funding to proceed.

“The north-facing development captures views of One Tree Hill, Mangere Mountain and the Manukau Harbour which will enable the community to enjoy its natural surrounding environment,” Mr Taylor says.

“Market Cove is well positioned to also take advantage of the new motorway link to the CBD that is expected to open in early 2017. It is also right next door to the popular Mangere Bridge and Ambury Regional Park, and only 8km from Auckland International Airport,” he says.

“With a high level of amenity proposed in the form of a number of large common gardens, linear and pocket parks, and a new coastal esplanade featuring walking and cycling tracks, Market Cove will promote an active and healthy lifestyle and a tight knit and nurturing community that is connected to its surroundings.”

Mr Taylor says the first stage of construction will focus on the 38 terraced townhouses, designed by architects Young + Richards, located on the western edge of the site accessed by Mahunga Drive.

“The terraced homes are all about architecture that optimises interaction with the surrounding streetscapes and urban realm. With stylish simplicity and well considered interior layouts, the terraced homes will offer two, three, four and five-bedroom options.”

Lemauga Lydia Sosene, chair of the Mangere-Otahuhu Local Board, says the development and the new wave of residents that will come with it will be great for the economic and social growth of the Favona-Mangere area.

“I’m also encouraged by the level of design and quality urban planning going into Market Cove and the array of community facilities that will be on offer, including the rejuvenation of the harbour frontage, which I’m sure will make it a fantastic asset for the wider community.”

Construction on the terraced homes is estimated to be completed in the second half of 2017.