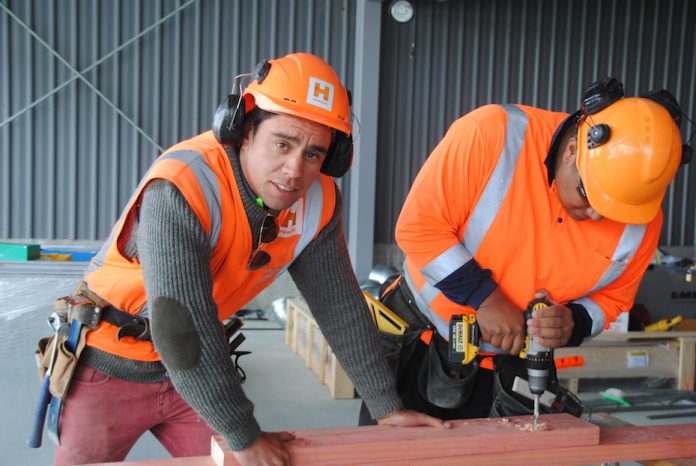 Hawkins is New Zealand’s largest privately-owned construction and infrastructure business, employing 750 people, with a projected revenue for 2016-17 of close to $1 billion.

The company delivers projects vertically, horizontally and under the ground, working around New Zealand and offshore in the Pacific.

To do all this it relies on an extensive network of contractors across the trades to deliver projects, and while Hawkins does not employ large numbers of apprentices directly, it supports substantial numbers through its supply chain, and is part of developing a solution to the current industry-wide trade shortage.

In 10 years’ time, more than 40% of New Zealand’s population will be Maori, Pasifika and Asian, and by 2050 they will make up the bulk of the country’s workforce.

But the vast majority of Maori and Pasifika are under 25 years old, and outcomes for them in the construction industry have not been great. In 2009, fewer than 20% of Maori carpentry apprentices succeeded.

Any solution to the trade’s shortage needs to involve a plan to harness the potential of the burgeoning Maori, Pasifika and Asian workforces into the trades.

Following the devastating Canterbury earthquakes in 2011, the impetus came from South Island Iwi, Ngai Tahu, to ensure there would be employment and leadership opportunities for all Maori living in Canterbury through the rebuild.

Supported by government, Ngai Tahu formed He Toki, a collaborative partnership, with the ARA Institute (formerly CPIT) and Hawkins (providing an industry voice), with the focus on building career pathways for Maori through construction.

Five years on, and He Toki is achieving strong results, with the focus now on expanding career pathways into other industries. To date, there have been more than 1000 scholarships for He Toki students, with 80% going on to further learning, jobs and apprenticeships.

Hawkins works very closely with its sister Pasifika Trades Training consortium, with 300 enrolments across both consortia this year.

Living under a bridge before he found He Toki, Amos is now completing his apprenticeship and is a mentor to other trainees and apprentices, having grown from a shy young lad into a confident leader.

Recently Hawkins did some comprehensive numeracy testing, and Amos’ results were right at the top.

Off the back of He Toki, there are now 16 Maori and Pasifika Trades Training partnerships throughout New Zealand, with Hawkins involved in two in Auckland, one in the Waikato and one in Wellington, as well as with He Toki in Christchurch.

He Toki learnings are being shared in the collaborative development of other models, such as the Ara Jobs and Skills Hub at Auckland Airport where, taking advantage of the long-term construction window, Auckland Airport has made a commitment to a Hub focused on pipelining South Aucklanders into work at the Airport.

Ara is providing compliance and skills training “on the job”, together with a focus on individual learning plans and upskilling the existing workforce.

The initial focus has been on construction, but Ara will continue to grow and service other industries, including hospitality, logistics and retail. Hawkins is now involved in the establishment of a similar collaborative jobs and skills hub for the Auckland CBD.

Over the past two years, the He Toki team had also led the development of Ako Whakaruruhau, supporting culturally responsive learning practice in the construction industry.

As part of this work, Hawkins has established an internal mentoring programme in Auckland to support Maori and Pasifika trainees and apprentices.

The company has 17 mentors who are supporting 35 trainees and apprentices across its subcontracting teams — carpentry, electrical, concrete, plumbing and tunnelling.

And this programme is now expanding into Hawkins’ Wellington operation. It is about harnessing the potential of young Maori and Pasifika, and ensuring trainees and apprentices “stay on the waka”, particularly during their first years in the workforce.

Hawkins has also aligned with #BuildAKL, a campaign that has been developed by Auckland’s construction and infrastructure sector employers, in partnership with Auckland Tourism, Events and Economic Development (ATEED). The aim is to get 4200 youths into the industry within the year.

Hawkins is also determined to support more women in construction careers, including the trades. Corporate affairs general manager Nancy McConnell says the awareness of what the trades can offer is increasing among women.

“We’ve seen growth in the number of women coming into construction. Success in the trades today, for men and women, is not only about being a competent tradie — it’s about good communication, problem-solving skills and being able to work as a team. We’re seeing many women excel in these areas.”

As an industry, more of these collaborative initiatives and a collective vision are needed, so why not influence the procurement of construction contracts to ensure everyone is taking responsibility for training and mentoring New Zealanders?

It requires collaboration, and this is the challenge as trainers, educators, employers, iwi, community and families.

Industry training providers and organisations, employers and schools need to recognise that not one size fits all — that pathways need to be vertical, horizontal, adaptable and easy to navigate.

And that the world of work needs to be an authentic, contextual, recognised part of the school curriculum.

Workforce diversification in the real world of New Zealand is not just about understanding where industries are going with the shift in technology and automation, but also how they are going to harness the potential of as many kiwis as possible, including men and women of all ages and walks of life.