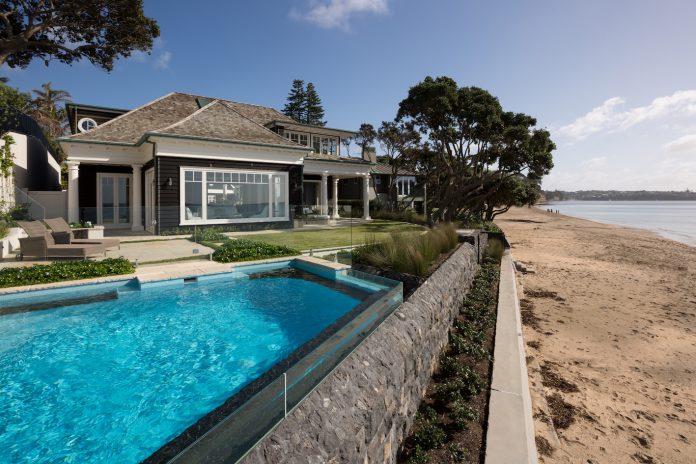 The company was also awarded the national category win for the New Home over $2 million Award, the Craftsmanship Award, and the Plumbing World Bathroom Excellence Award.

Mr Davidson says he was blown away to win the award at his first competition, and would recommend other members considering entering.

“This was our first time entering the House of the Year competition, so winning the award was unbelievable given the high standard set by the other finalists. It’s a great way to showcase the great work we can do,” he said.

Mr Davidson says the Cape Cod style of the home made it stand out from the other entries in the competition, but he explains the size and location of the site created a challenge.

“The style of the home is very different from anything else in the competition. Everything from the roof to the outside area is extremely detailed, which made it unique,” he says.

“The layout and shape of the site was, at times, a logistical challenge, stretching some 80 metres from the road front — for example, when installing the precast floor panels at the beginning of the build and when it came to building the pool at the seaside after the house was built.  Our team of carpenters, subcontractors and suppliers did a brilliant job.”

Judges were impressed by the supreme sophistication of the home, and praised the exceptional craftsmanship of the project.

“This home combined the architect’s vision and detailing with outstanding skills and craftsmanship to create a home full of delight, discovery and sophistication,” they said.

“The home’s adaptation of an American classic, which was built on a difficult and complex site, is bound to be a trend setter. It clearly displays the builder’s desire to create an experience that changes perceptions and the quality of lives.”

Mr Davidson says winning the award gives the company more recognition and credibility amongst the public and their peers.

“It gives us a huge amount of profile, and really just recognises the high standard of our work,” he says.

Mr Davidson praises the Registered Master Builders Association for its excellent reputation and the opportunity to enter the House of the Year competition.