Home BCITO ‘I was slowly dying inside and needed to change’ 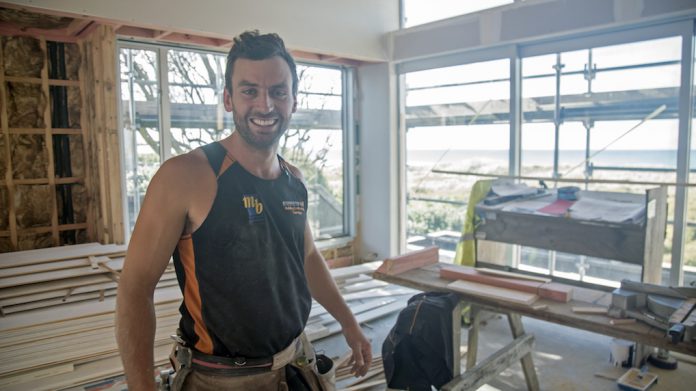 When Sam Hartnett felt himself “slowly dying inside” he knew he had to change something.

A qualified lawyer working for a Tauranga-based firm, the 33-year-old had a job the envy of many. Dealing mainly with Maori land issues and cases of civil litigation, he was often in the Maori Land Court or High Court, and seemed set for a successful career.

Yet now, eight years after getting his law degree, Hartnett is no longer to be seen in courtrooms — instead he wields a hammer and saw as a carpentry apprentice working on high-end housing projects in the Bay of Plenty.

“I got to the stage where I couldn’t any longer face sitting at a desk in front of a computer,” he says of his old job. “I’ve always been an active person and I was getting cynical about people and life in general — I was slowly dying inside.

“I decided I needed to change, and when a friend suggested I go building it sounded like a good idea. A fortnight later I was on a building site digging my first footings.”

Mr Hartnett’s story comes as the Building and Construction Industry Training Organisation (BCITO) has launched the Not Your Average Tradie Road Trip, in which a group of BCITO apprentices are travelling the country to help out community groups, schools and charities with building projects.

The trip is aimed at demonstrating job opportunities in the construction industry at a time when it is facing a severe shortage of skilled trades. Up to 50,000 more workers will be needed in the next five years as the building boom continues.

Once he had made his decision, Mr Hartnett signed with the BCITO to do an apprenticeship, and is working towards the National Certificate in Carpentry. He has completed three years and has one year left before fully qualifying.

“I love it to be honest,” he says. “I like the physical aspect, being outside and you still get to use your brain, you certainly don’t switch that off.

“I went into it with a lot of idealism. I wanted to help people and make a difference.”

He says he has nothing against the legal profession. “A lot of people find it a great thing to do, but I don’t regret changing. The law firm I worked for was really supportive of my decision, and while I keep in touch with them, when I go back and see my old desk it confirms for me I did the right thing.”

Yet it took guts to make that decision. At the time he and Emma had just married and were expecting their first child (they now have a two-year-old son and a seven-month-old daughter) — and took an initial drop in pay.

“I did think I might have been a bit selfish from a financial point of view and made things difficult for the family. But Emma was really supportive and money was not the be-all and end-all,” he says. “It is working for me and I wouldn’t change it.

“When I started law I was already $30,000 in the red from my student loan — with a trade you are paid while you learn, and there is no need for a student loan.”

However, he believes there is tremendous opportunity in the construction industry to earn big money. “My main goal is to finish my apprenticeship, but I’d love to progress to being project manager on a multi-million dollar job.”

Mr Hartnett, who is currently working on a 400 sq m beachfront house development at Papamoa with his employers Edinbridge Resources, says he never had an ambition to be a builder when growing up.

“My father was in and out of the building industry and I’d go and grab his tools at times. But I always thought law would be a more refined career.”

BCITO chief executive Warwick Quinn says New Zealand needs more apprentices as building consents track to a 40-year high. It has close to 10,500 apprentices in training, but many thousands more are needed.

“We are in the midst of one of the biggest building booms in recent memory, and it is expected to last many years,” he says. “Job prospects are excellent.”

Mr Quinn says the tradie road trip is running over four weeks. It started in Auckland and will also visit Tauranga, New Plymouth and Wanaka to help groups with buildings in need of maintenance and updating.

Up to 10 apprentices will be involved, covering the trades of carpentry, flooring, interior systems, joinery, pre-cast concrete, and painting and decorating.

Schools, a surf club, a health and social services provider, and Habitat for Humanity, a non-profit group which builds and repairs houses for people in need, will be among the groups the road trip helps.

“This is a wonderful opportunity to showcase a range of careers in construction, while also giving something back to communities,” Mr Quinn says.