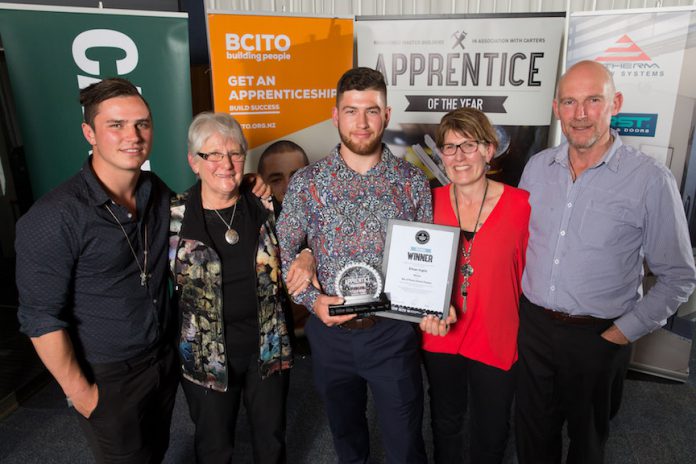 Tauranga’s Ethan Inglis was over the moon when he was named the Bay of Plenty Central Plateau Registered Master Builders CARTERS 2016 Apprentice of the Year.

The 22-year-old said winning the award gave him a great sense of achievement and made his hard work worth it.

“It reinforced the fact that if you put your mind to something, you can achieve it. All the blood, sweat and tears over the four years of my apprenticeship payed off in more ways than just a qualification,” he says.

Ethan says after deciding university wasn’t for him, an apprenticeship was the perfect fit.

“I had always been into working with my hands and I realised that university would probably leave me with a mediocre degree, a large student loan and an even larger beer belly. Becoming a carpentry apprentice occurred naturally from there, and I never looked back,” he says.

Now living in London, he was employed by Skilled Building Solutions at the time of the competition, and says it was his employers who motivated him to enter the competition.

“I wasn’t initially too eager to enter, but my bosses explained many doors the competition could open for me, even if I didn’t place. It ended up being the best thing I have done for my career,” he says.

“Even if you don’t win, the knowledge and skills you gain through partaking in this competition will put you far ahead of your peers.”

He found the time pressure of the practical challenge the most difficult part of the national competition.

“The tight time limit on the practical component meant that you were challenged to make the right decisions quickly. It really pushed me to put what I had learnt to the test,” he says.

“I had no idea what to expect going into the competition, but getting to meet like-minded apprentices and people in the industry made the whole experience really rewarding.”

Ethan explains that his apprenticeship with Skilled Building Solutions had everything to do with his win.

“I wouldn’t be the builder I am today without being mentored by my bosses and co-workers, and being grilled by my BCITO training advisor,” he says.

“At the end of the day, a lot of your success in the industry comes down to your employers and the faith that they have in you. They put you in a position of responsibility, mentor you and give you a shot at succeeding. I wouldn’t be where I am now without that.”

Ethan encourages other apprentices to enter the competition as it is a great way to establish your reputation in the industry.

“I would say to them don’t hesitate when thinking about entering. You have nothing to lose and so many skills and opportunities to gain.”

The Registered Master Builders Apprentice of the Year competition is made possible thanks to principal sponsor CARTERS, the Building and Construction Industry Training Organisation (BCITO), and supporting sponsors the Ministry of Business, Innovation and Employment (MBIE) and APL through their Altherm, First and Vantage brands.