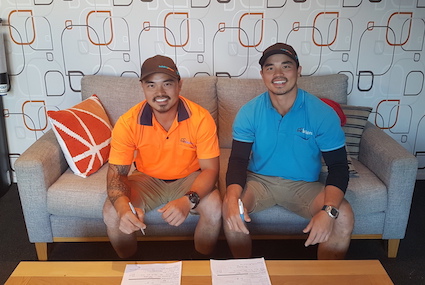 Jourdan Lee spent seven years climbing the banking corporate ladder — and then the next three years saving enough money to quit. When he had, he threw his career away to become a builder.

Today he wields a hammer and saw as he begins a three-year carpentry apprenticeship, but just weeks ago he was dealing in millions of dollars a month in his role as an assistant business banking manager at the ANZ Bank in Hamilton.

“I’ve gone from being a keyboard warrior to a hammer and spade warrior,” the 31-year-old father of two daughters says.

“But I am excited about the future. I’m earning money while I learn, and indications are I can be making up to $85,000 in time. For now it’s about working hard and enjoying it along the way — the money should come along fine.”

But he is not alone. His twin brother Bart Lee is doing the same, giving up a promising corporate career — he was a senior associate at consulting firm PwC for four years before establishing his own personal fitness training business — to join Jourdan as an apprentice builder.

The Fiji-born twins, who both have university commerce degrees, are now working together full-time for Hamilton-based MH Builders.

“We had been talking about it and budgeting for about three years,” Jourdan says, “but it was only a year ago when I felt I had saved enough money that we really made the call to do it.”

Their story has come to light as the Building and Construction Industry Training Organisation (BCITO) runs a Not Your Average Tradie Road Trip, in which a group of BCITO apprentices are travelling the country to help community groups, schools and charities with building projects.

The trip is designed to attract more people into the trades at a time when 50,000 more workers will be needed in the construction industry as the building boom continues. About half of these will need to be qualified tradespeople.

In three years Jourdan put aside enough money to tide his family over for a year (his two daughters are aged eight and four).

“I wanted to make sure it wasn’t too hard on the family and that we didn’t fall behind in any of our payments,” he says. “Because of this I didn’t get into the building gig as early as I wanted.”

The first person he had to convince was his wife Martine, a corporate marketing manager.

“To put it in perspective, I was in banking for seven years (including a stint with Bank South Pacific in Fiji). Before that I worked as an assistant manager at a resort in Fiji, and before that I was in the airline industry,” he says.

“So when I told Martine I wanted to get into building her first reaction was ‘you’ve got be kidding.’

“I took her through my plan and although she supported me she said ‘this better be your last job change’.”

Now three months into his apprenticeship, Jourdan says his first day was tough. “It was really physical with lots of heavy lifting, but everything I do I ask lots of questions — this is how I learn and what makes it interesting.”

Even so, Jourdan does have some regrets. “Although I never intended banking as a career and always knew I wanted to do something with my hands and not be inside all day, there was still a lot of potential for me in banking. I would have been interested to see how far I could have gone.”

Ironically, Bart and Jourdan’s father, also a builder, had advised them against working in construction.

“He worked in Hong Kong but his whole idea was for us to get an office job — he didn’t believe there was much future in building,” Jourdan says.

“We didn’t tell him until last November what we were doing and, surprisingly, he was quite supportive.

Bart, who is married with a seven-year old daughter and a five-year-old son, tried to find work as a builder in 2012 when he resigned from PwC.

“I’ve always wanted to have the skill to build houses or do renovations, and when I left PwC I rang every builder in the Waikato I could find but, at the time, no one was taking on apprentices.”

So he set up Bart Lee Training Ltd, and continues to offer personal training sessions each day before and after work with MH Builders.

“Working with Jourdan is one of the best things to happen in my life,” he says. “I’ve no regrets at all, I want to design and build houses. I want to be a stand-out player, whether I’m working for someone or running my own business.”

BCITO chief executive Warwick Quinn says the ongoing building boom is putting pressure on carpenters, with more than 29,000 needed in the next five years to meet demand and to replace people who leave.