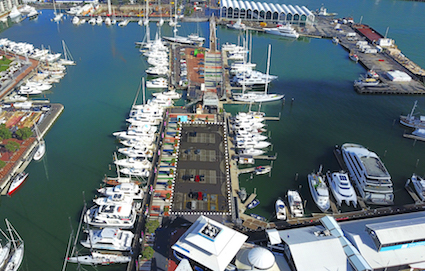 The public’s ideas on how Auckland’s Eastern Viaduct could be shaped when it becomes free of public car parks are being welcomed by Auckland Council’s regeneration agency, Panuku Development Auckland.

Public parking next to the Maritime Museum will be removed for good following the completion of the Volvo Ocean Race in March 2018.

This is being done to prioritise the space for pedestrians and cyclists, and improve the connection between the waterfront corridor and Wynyard Quarter.

Panuku invited people to visit the area from September 30 to October 1 to play the Place Game, a Project for Public Spaces tool that allows participants to share their thoughts on a space.

To help people imagine Eastern Viaduct free of public car parks, parking was temporarily off limits to make way for The Auckland On Water Boat Show.

Waitemata Local Board chair Pippa Coom says it is fantastic that Panuku is taking steps to create a safer and more attractive space that prioritises people at the Eastern Viaduct.

“The Board supports a new public space which will enhance connections between the waterfront and city centre to cater for the growing numbers of visitors, workers and residents,” Ms Coom says.

The project is one of a number proposed as part of the refreshed city centre and waterfront plan, which Auckland councillors agreed to advance at a planning committee recently.

Once public parking is closed, some vehicle movements on Eastern Viaduct will continue. Parking for berth holders will remain unchanged, and service vehicles will be permitted access to deliver to businesses and restaurants on Viaduct Harbour.

Panuku’s Rod Marler says the removal of public car parks will improve connectivity, legibility, and visibility across the waterfront, and encourage more people to explore the area, which sees about 1.9 million people pass through each year.

“This is a great opportunity to design a quality public realm that prioritises pedestrians and cyclists, improves safety and enhances the quality of the visitor experience.”

The nearest public parking to Eastern Viaduct is in Downtown car park, which has more than 1900 spaces, including 19 mobility car parks.

More mobility car parks are available on Princes Wharf and in Wynyard Quarter.