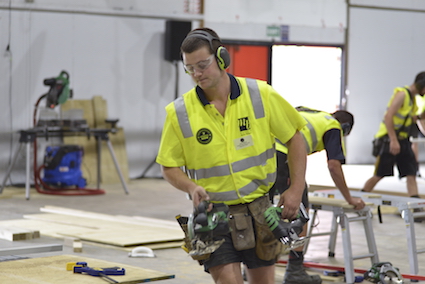 Registered Master Builders CARTERS 2017 Apprentice of the Year competition runner-up Jack Clifford’s early love of carpentry may have given him a jump on the competition.

The 23-year-old’s father used to let him loose on the tools in his at-home workshop when he was a small boy.

“I’d always tinkered around building things in my old man’s workshop. I started when I was about five years old, but I wasn’t very productive back then. I was just cutting bits of wood in half. I was quite destructive actually,” Jack says.

He’s come a long way since then, taking out the top award at the Hawke’s Bay and East Coast Registered Master Builders CARTERS 2017 Apprentice of the Year awards before reaching the final in Auckland.

Jack, who is employed by Christie Builders and Joiners, says he was “pretty stoked and surprised” to secure second place.

“All the finalists were really skilled, it was a tough competition — everyone was definitely in the running.”

As part of the national competition, the 10 finalists were tasked with a six-hour practical challenge where they built “puppy palaces” for the SPCA. Television cameras, judges, friends, family and employers watched on from the sidelines.

The practical test was the most challenging part of the competition, Jack says.

“It was hard to prepare for as it was all a big secret. I tried not to let the pressure get to me, but it’s always a bit funny having a whole lot of people staring at you.”

Jack says his employer Christie Builders and Joiners stood by him through the whole competition.

“They were very supportive. My boss did a couple of practice interviews and we studied together. He really helped me prepare.”

The judges were impressed with his work, commenting that “he was in control throughout the puppy palace build, and demonstrated a passion for the trade”.

“Jack excelled in the interview stage, speaking well about his project and demonstrating great knowledge of the industry. He was very engaging throughout, and has a bright future ahead of him,” they said.

Jack entered the competition because he wanted to see how he compared with New Zealand’s other apprentices. He says the competition was also a great networking opportunity.

“They’re all really good people, and I made some new connections.”

He encourages other apprentices thinking of entering the competition to give it a go.

“It’s been great for me. If you’re considering entering then don’t have any doubts — go for it, give it 110% and you can’t lose — you’ll always get something out of it.”

Apprentices, employers and young people aspiring to be part of the construction industry are encouraged to join the Registered Master Builders Facebook page at
www.facebook.com/registeredmasterbuilders.

The Registered Master Builders Apprentice of the Year competition is made possible thanks to principal sponsor CARTERS, the Building and Construction Industry Training Organisation (BCITO), and supporting sponsors the Ministry of Business, Innovation and Employment (MBIE) and APL through their Altherm, First and Vantage brands.