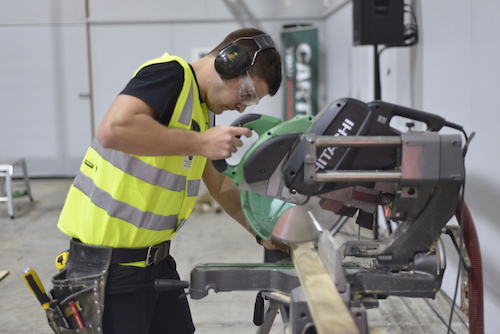 As the youngest apprentice to make it through to the 2017 Registered Master Builders CARTERS Apprentice of the Year finals, 20-year-old Logan Alderson impressed the judges to take out third place with his excellent grasp of the industry.

To reach the finals, Logan, who trained through the Building and Construction Industry Training Organisation (BCITO) and is employed by CS Building, took the top award at the Auckland Registered Master Builders CARTERS 2017 Apprentice of the Year awards.

He says the standard of the other competitors was high, and he was humbled to come third in the national competition.

“It’s pretty awesome, it’s a big achievement. But I’m very competitive. So, although it was good to get third, I’m always thinking about how I can improve,” he says.

As part of the competition, the 10 finalists took part in a six-hour practical challenge to build “puppy palaces” for the SPCA — as television cameras, judges, friends, family and employers watched on from the sidelines.

Logan describes the practical challenge as the hardest part of the competition.

“It was pretty full on. It was a bit of a mission to get my head around building the puppy palace, plus I had my whole family and workplace there watching. It was a bit of pressure for me,” he says.

But, his efforts paid off and impressed the judges, who said his puppy palace was built to a high standard of craftsmanship.

They were also very impressed by Logan’s solid understanding of the building and regulatory environment, and with his great communication skills.

Logan says he was brought up around building sites. “My granddad was a builder. When I was at school I worked with him during the school holidays and I got really interested in it. I started off by just passing him his tools and things when I was around 11 years old.”

He says his employers, CS Building, have also been really supportive.

“They gave me the time off work, and they came to the awards dinners. I couldn’t really ask for a better boss.”

He encourages other apprentices to give the Apprentice of the Year competition a go.

“It opens up a lot more opportunities, and because you have proven success, it gives you more credibility in the industry,” he says.

“It was also great meeting all the other apprentices. We all got along really well, and we met up again at the House of the Year awards and Outward Bound.”

Apprentices, employers and young people aspiring to be part of the construction industry are encouraged to join the Registered Master Builders Facebook page at
www.facebook.com/registeredmasterbuilders.