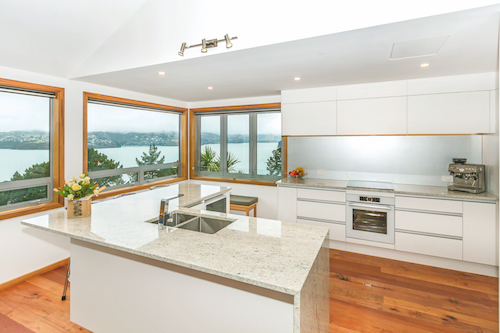 After the Canterbury earthquakes struck an original 1975 Peter Beaven-designed Christchurch home, it was in need of some significant restoration work.

The superb renovation by Premium Homes was recognised at the 2017 Registered Master Builders House of the Year competition, picking up the Bunnings Renovation $500,000 to $1 million award at the national competition.

The judges noted that the owner and builder had worked together on the challenging renovation to produce a fabulous home that will service its occupants for many years to come.

Work began with a complete re-level and repair of the home’s quake-damaged foundations.

“You had to be a mountain goat to get down to the bottom of the house,” Premium Homes director Andrew Breward says.

“The house had sunk down the hill and needed to be re-levelled. A massive retaining wall, which was holding up the drive, collapsed and failed, so we had to rebuild that first to get a platform that we could actually work on.”

The home was stripped back, and extensive effort went into fixing and straightening the framing. Salvageable elements were rescued and seamlessly incorporated into the new renovation.

The four-bedroom home is designed to benefit from the stunning views, and the judges said the builder’s workmanship and attention to detail made it a stand-out renovation.

“When the judges first turned up to look at the house they thought they were at the wrong place — they thought it was a new house,” Mr Breward says.

“It was an old home, but we made it look modern. We used lots of rimu and native timbers that really enhanced the look of the house, and we encouraged the owners to get rid of a few of the home’s more dated features.

“The rimu surrounds and all the trims were perfectly done and oiled. We put a lot of work into colour matching the timber finishes. Our foreman is passionate about making things right, and we had an antique restorer work on the rimu.”

But Mr Breward says it was still a surprise to take out the National Award.

“We didn’t expect to win — we went up to Auckland to have a bit of time away and we invited the home owners to come with us,” he says.

“It all happened really fast. We were one of the first awards to be announced, and I saw the picture of the house come up on the screen before they called us out and I just thought ‘Oh my God, we won it!’ It was an unbelievable surprise.”

He says the national win has been great for the company’s reputation, and that he’d enter House of the Year again.

As a result, Premium Homes has been approached by insurers to tender for work on some of Canterbury’s other quake-damaged hillside homes.

House of the Year is made possible through the support of PlaceMakers, Master Build Services, GIB, Nulook, CARTERS, Plumbing World, Resene and Bunnings Trade.