Home Master Builder Awards School chapel gives nod to the past as it looks to the... 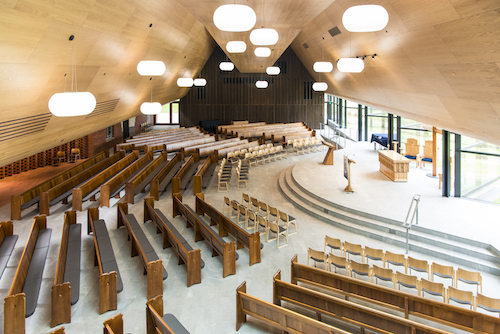 The St Andrew’s College Centennial Chapel in Christchurch has been thoughtfully resurrected, following the Canterbury earthquakes, to embody the values, history, traditions and future aspirations of the College.

The chapel was recognised as the National Category Winner of the Construction Marketing Services Education Award at the 2017 New Zealand Commercial Project Awards.

The original chapel had to be pulled down after it was extensively damaged by the earthquakes. However, many architectural treasures were salvaged, and elements from the old building were incorporated into the new build.

As soon as they entered the main door of the finely detailed build, the judges said they were struck with a sense that it was a special place, representing the history and aspirations of the College.

“There’s a beautiful transition between the two elements. If you stand at the rear it looks old, if you go to the front it looks modern and brand new,” Armitage Williams head project manager Craig Greene says.

“Everybody who walks in the building, their first word is ‘wow!’ And that’s exactly what we wanted.”

The chapel’s layout is a brave departure from traditional axial geometry.

“The structure is complex. Two towers support the 220-tonne steel roof, which features vaulted ceilings and cantilevered sections which are anchored back to central points,” Mr Greene says.

“The acoustics are just amazing. There was some acapella singing at the opening event. The students sang their hearts out and the hairs at the back of my head stood up — it was awesome.”

Mr Greene praises the massive effort put in by his team of tradesmen, the subcontractors, architects Architectus Auckland, engineers Holmes Consulting, and St Andrew’s College who put their faith in them.

“It was hugely rewarding, it was a massive team effort and I was personally delighted with the result. The community suffered after the earthquakes, so it was good to put something worthwhile back in which really made a difference,” Mr Greene says.

“The end result was superb, and to win the award was the icing on the cake for everybody’s hard work.”

Armitage Williams’ partnership with the school continues. “We’ve not moved away from St Andrews, and have now completed another five projects, including a 27m bridge which was made off site in Timaru.”

The company has been Registered Master Builders for more than 30 years, and is entering another project in this year’s New Zealand Commercial Project Awards.

“From a company perspective, we’re humble and we go on our name and the quality of our work, with 60% to 70% of our work being repeat work,” Mr Greene says.

The awards are a fantastic communications tool for us — they’re a great way to showcase the quality of what we do.”