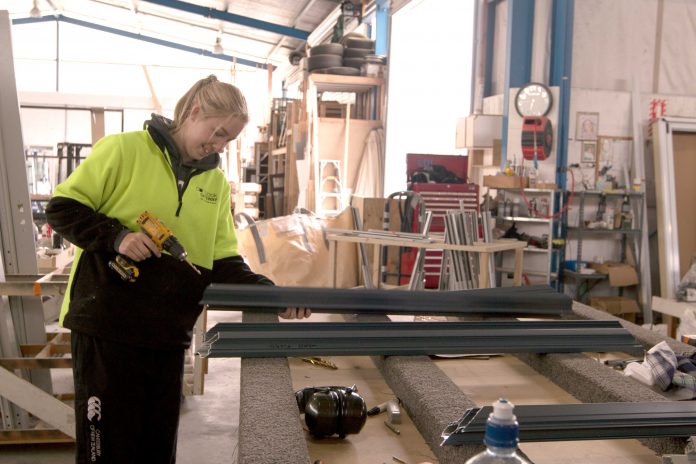 Female trade apprentices are loving their career choice, but few considered a career in construction while they were at school, research shows.

Thursday, March 8 was International Women’s Day — and the Building and Construction Industry Training Organisation (BCITO) wants to attract more women to the industry.

It surveyed its female apprentices and found that 96% of them had strong job satisfaction.

The construction industry is crying out for workers. But a career in the trades is rarely suggested to girls while they’re at school. Nearly three-quarters (72%) of BCITO female apprentices said they had never participated in construction-related courses while at school, and two-thirds (67%) were working elsewhere before starting their apprenticeship.

Apprentice Nerida Laws worked in retail for seven years before she picked up the tools. She enrolled in the BCITO’s National Certificate in Plaster Board Fixing & Finishing, and is now employed by JFS Interiors.

“Working in the trades gives you a fantastic work-life balance and a steady income. I love the team environment of working on-site and the sense of accomplishment you get when you complete a job,” Ms Laws says.

More than half (53%) of BCITO female apprentices said “seeing the job finished” was the best thing about being a tradie.

Apprentices were also pleased with the great opportunities for career progression, the secure future and the great lifestyle provided by their career choice.

Ms Laws is currently working on a hotel site in Queenstown, and says although there are at least 50 male tradies and only one other woman, she enjoys the banter, and that it’s a very positive work place.

Her employer, Paul Fallon, says JFS Interiors had no hesitations about taking on a female apprentice.

‘More and more females on site’

“We are seeing more and more females on site. It might have been unusual 10 or 20 years ago, but it’s almost commonplace now,” Mr Fallon says.

“While the work can be physical, there’s minimal heavy lifting. There are no ways in which women are any better or worse than the guys.”

Less than 3% of BCITO apprentices are female. BCITO chief executive Warwick Quinn says the trades offer a range of careers, and more women are needed if New Zealand is to meet the industry’s demands.

“More than 65,000 construction workers are needed over the next five years, and a little under half of these need to be trade qualified. The sector is crying out for workers and our traditional workforce pools are not meeting demand, so boosting gender diversity is vital.

“The BCITO is working hard to figure out how it can boost female participation in the industry, including leading a group of organisations involved in a three-year research project by the Ministry for Women and National Centre for Tertiary Teaching Excellence,” Mr Quinn says.

“With the new fees free scheme covering student fees for two years of industry-based training, our message to women is that there has never been a better time to consider a career in the trades.”

To find out more visit www.bcito.org.nz.