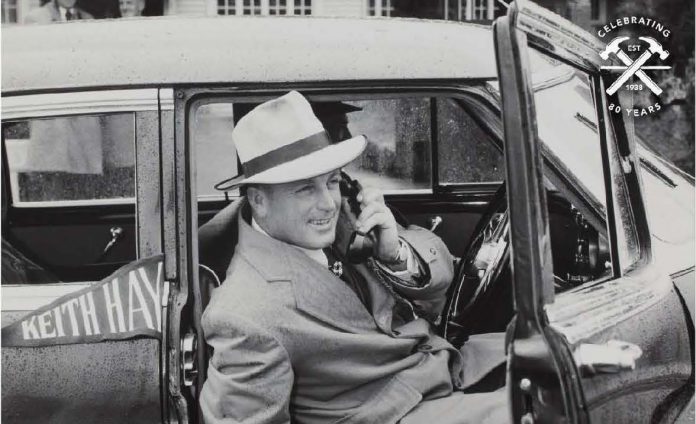 Keith Hay Homes is this year celebrating 80 years of building in New Zealand.

The company pioneered a new era of low-cost prefabricated housing in New Zealand — as popular and arguably more relevant today as it was back in 1938.

The company says prefabrication is at the heart of innovative construction, and will play an integral role in shaping the future of the New Zealand building industry.

Keith Hay pioneered the transportable housing market when, in the late 1930s, he won a tender to relocate an American army camp from the Auckland Domain to Panmure by using the novel method of shifting the buildings in large sections instead of dismantling them.

New Zealand’s desperate housing shortage after the war provided an opening for an innovative approach — constructing houses in a central assembly yard and then transporting them to suburban locations.

Mr Hay was an innovator in the development of house shifting trailers and winches on rubber-tyred tractors.

Pine was a renewable source of timber and could be nailed more quickly.

Through the 1950s, Mr Hay fought the conservatism of local councils and building societies to make building with pinus radiata permissible.

He was also an innovator in speeding up production methods, cutting labour costs and incorporating plastics and other new materials into home construction.

Today, Keith Hay Homes is still a proudly family-owned and operated company, focused on helping New Zealanders into their homes.

Mr Hay’s son David is managing director, and has been working in the family business for more than 45 years. David’s daughter Roseanne and son Matthew are third-generation family members also working in the business.

Matthew Hay is Keith Hay Homes general manager and a member of the Prefab NZ board, and also directs the company’s executive team that is constantly working on the evolution and development of the company and its product range.