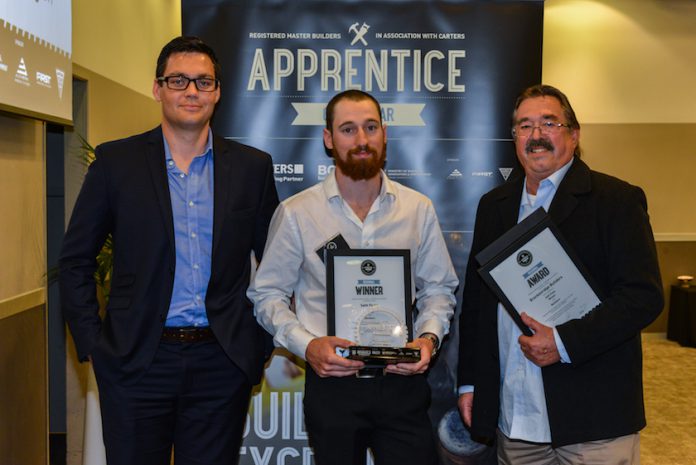 Seth Foote impressed the judges enough to take the top place at the Northern Registered Master Builders CARTERS 2017 Apprentice of the Year competition.

The 27-year-old Warkworth apprentice was thrilled with the result, as he was able to do his boss proud.

“I went into the competition with the intention of representing my boss the best I could, so when I won it I felt like I did a great job in doing him proud,” he says.

Seth credits his boss, Steve Brackenridge of Backenridge Builders, for helping him develop his building career. He saw the competition as a great way to acknowledge his support, alongside everyone else who helped him in his apprenticeship.

“I wanted to represent Steve because he has invested so much into my apprenticeship. I also wanted to give all the guys who trained me the recognition they deserve.”

Seth described the competition as a great experience, as he was able to meet a range of talented and passionate apprentices like himself.

“On the day it was pretty phenomenal to meet so many other young tradies who were as enthusiastic as I was. Getting to meet and talk with these guys about our experiences, alongside getting to share in the excitement of the competition, was really cool,” he says.

Seth had his apprenticeship skills put to the ultimate test during the national competition, with the finalists completing a practical challenge within a short time period. Despite the intensity, Seth enjoyed the end result.

“Working to such a tight time schedule at the practical event was probably the most challenging thing. But it was great to see what everyone was able to build in such a short time,” he says.

Ever since he was a kid, Seth had always wanted to become a builder. After working as a butcher for a short period of time, he decided it wasn’t for him. So, he pursued his dream and became a building apprenticeship.

“I’ve always enjoyed working with my hands. I love being able to work outside, especially getting to work on projects where you get to build someone’s dream home. It is a real honour to be in that position.”

Seth encourages other apprentices who are considering entering the competition to give it a go.

“It is a really worthwhile investment of your time. Even just for yourself, it is a good way to see where your skills are at, and figure out the places you need to improve.”

“If you’re going to do it for your boss, it is a really wicked way to honour their investment in you.”

Apprentices, employers and young people aspiring to be part of the construction industry are encouraged to join the Registered Master Builders Facebook page at www.facebook.com/registeredmasterbuilders.