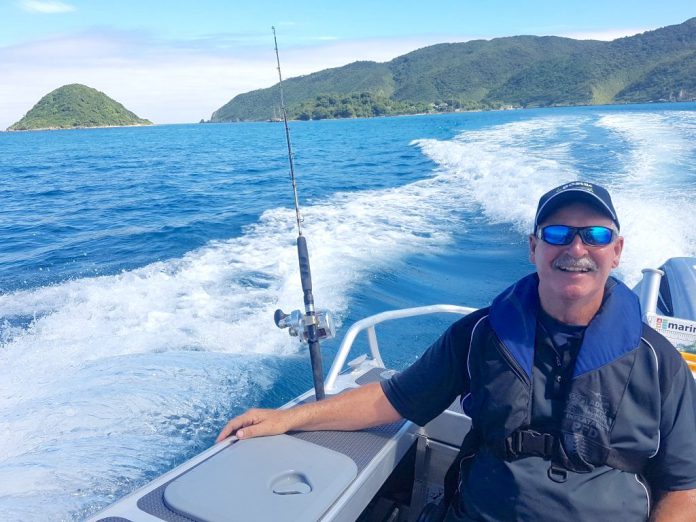 One of the wonderful spin-offs that accrues as a consequence of producing a fishing show is that it provides access to superb equipment and an incredible variety of terminal tackle.

I grew up with baited hooks and, although I would utilise several different rigs, my tackle box rarely contained anything else.

That said though, live baiting is something I love, and catching it occupies its own unique set of challenges. For species such as snapper, I target jack mackerel for bait — but the old macks are equally as good for kingfish.

Catching these little critters is best achieved using sabikis. They are a dime a dozen at any tackle store, and I use a rod that enables you to wind the sabikis up through a central tube.

As everyone knows, avoiding tangles is the name of the game, and this type of rod (mine are “bait stiks”) is ideal.

Macks and koheru school in tight packs, and are very easy to identify on your sounder. No bait is necessary, drop to the desired depth, apply a little movement, and load up.

A live bait tank is then necessary to keep them alive. If you lack such a facility then use iced, fresh dead butterflied bait.

Remove the backbone by running your knife up from the tail on both sides of the backbone. Remove the spine and leave head and guts attached with flanks trailing behind.

Fresh dead baits with a few helpful lacerations will also do the trick. However, that said, live baits are the star performers.

I use a ball sinker floating down to the bait with two 8/0 hooks as my chosen rig. I tie one hook on the end of the trace and snood the second one about 125mm further up. One hook is angled through the mouth and the second back in the gut area — then cast or feed the bait down in to your burley trail.

For live baits, put one hook behind the head and the second in the gut cavity with a half hitch around the tail. Cast and feed the bait down on free spool using your thumb to avoid an overrun.

When a predator latches on avoid applying tension and let them have the bait. I will strike a kingfish on a slow count of three, but a big snapper will often grab a bait, pull the line, stop and swallow the bait, then head for home.

Patience is a virtue so they say, and not striking too early is critical. Learning not to be trigger happy while live baiting is a product of experience!

Sometimes in the heat of battle you wind up chock full of adrenalin, and it requires every ounce of restraint to avoid engaging gear too early. Do so though, and the rewards are significant.

To stop ball sinkers riding up the line and causing the bait to fold back on to the main line and tangle, I position the sinker on top of the bait and then tie it in place with a length of knotted rubber band (a thin one).

Make sure it is tied on to the trace so that it can slide. Every time you haul a fish in you will have to slide the band back down again, but that technique means you can trust the bait to be doing what you require.

When baiting kingfish, Bay of Islands skipper Bruce Smith taught me a very useful trick some years ago.

Kingfish are dirty fighters and plunge straight on to the nearest reef, rock or foul. They also pull away from the pressure you apply.

If you lock on to them and there is foul ground in the direction they want to head, odds are that they will have a great opportunity to bust you off.

Bruce taught me to quickly position my boat between the reef and the fish before maxing out the drag. The fish would then pull away from the pressure and head in to deeper water, thus increasing my chances of success.

Of all the live baits available, the one I crave is the slimy mackerel with its distinctive mottled pattern on the flank. They are snapper and kingfish candy, but harder to find in numbers. Slimies are often schooling with koheru.

One friend of mine has become a master at catching piper. A net is the logical way to load up on piper, but Jay anchors, deploys burley and, when the piper turn up, he uses tiny trout fly hooks on very light fleuro carbon line baited with a piece of pilchard.

He catches a dozen piper using this method then goes on the hunt! He has become a very successful big snapper hunter.

One of the attractions of fishing is that you never leave the classroom. Every day is another opportunity to learn and improve your techniques and systems. It also leads to an expanding selection of weapons to add to the arsenal.

In the next column we’ll have a look at soft baits and micro jigs, a couple of the more recent innovations that can change a slow day in to something spectacular.

I never leave home without covering several options. On some days baits are fantastic, and on others nothing seems interested.

It is then that you need to dig deeper into your tackle box and employ other tricks.