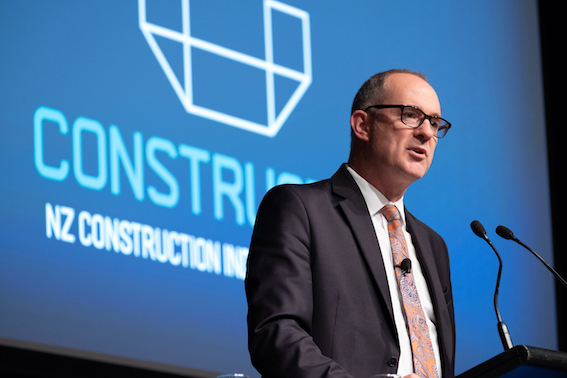 Constructive 2018, the New Zealand Construction Industry Forum under the auspices of the Registered Master Builders Association, was held in Wellington on August 16.

The event, an “all of industry” forum, brought together the entire supply chain, from finance, land, design and build, to enabling sectors such as research, training and regulation, with the enduring theme being collaboration.

Discussions were important to identify what the sector can do to respond to increasing demand for building, and to ultimately deliver well-being to the country.

This is pressing given the recently published National Construction Pipeline Report which highlights that the demand for building, particularly residential, will be sustained nationally for the next six years.

The Forum acknowledged that the performance of the construction sector was central to New Zealand’s economic growth, and importantly interwoven in New Zealand’s social fabric.

State of the sector

A survey of chief executives and senior managers in the construction sector and related industries agreed that in the past 12 months New Zealand’s economy had performed well, but less than half believed this will be the case over the next 12 months.

Housing and Urban Development Minister Phil Twyford confirmed that the construction sector was of strategic importance to the Government.

The Minister noted that the Government was mindful that the current allocation of risk and liability was concerning. He added that the current process must not under- or over-manage risk, and that risk must be placed on the parties best able to manage it.

Constructive 2018 welcomed Minister Twyford’s invitation to the sector to work with the Government on how to strengthen collaboration. The RMBA will continue to push this forward.

Leader of the Opposition Simon Bridges, National spokesperson for Housing and Urban Development Judith Collins and National Spokesperson for Building and Construction Andrew Bayly emphasised that their priorities were to ensure policy settings were firmly aligned to the interests of the sector, including on immigration, the Resource Management Act and infrastructure.

They noted that they would prompt a re-think of how construction was dealt with, and would look at how consenting problems could be addressed.

The Forum made it clear that change and transformation was already happening across the sector.

It provided an opportunity to share learnings about new technology and processes already being used in New Zealand. We are no longer only looking at overseas examples of leading practice.

BIM, while still in its infancy in New Zealand, was increasingly being used. New Zealand was not lagging, but the challenge for using BIM more widely was scalability.

The Forum included practical tips on how to use BIM, and it was recommended that companies use the New Zealand BIM handbook and other tools discussed and available at www.biminnz.co.nz.

Participants at Constructive 2018 also heard from representatives from construction companies who showcased technologies and innovations that were used for recent commercial projects such as 3D Modelling, which was important at conception.

Technologies increasingly involved programming in some form, and provided an opportunity to engage and attract wider groups into the industry, including urgently-needed younger leaders.

The successful culmination of these projects reflected a collaborative effort where there was trust and confidence across all parties involved in the build.

It was also noted that builders had to regard themselves as professionals, with employees, supplier stakeholders and their dependants relying on the success of projects.

There was strong alignment and consensus across key groups, including lead contractors, subcontractors and civil contractors.

Building as a profession must be valued highly, and demand recognition in respect to fair terms, conditions and sustainable margins.

The sustainability of the sector is at risk. Further failures of the sector potentially provided an opening for operators not based in New Zealand, who would not necessarily invest in the sector.

The Forum confirmed that the competitive procurement model was failing, and that we must move to a genuine relationship and partnership model.

The recent boom and bust cycles in the sector have led to a lack of skills and experience at the management level required to recognise and importantly understand and mitigate risk.

Similarly, there were also issues with capability in government departments’ procurement personnel.

The lack of skills was an issue at all levels across the sector. The challenge in improving industry attractiveness was the need to change generational prejudices against a career in the sector.

Parents, schools and people’s peers tended to view a career in the sector as less desirable than other training and career pathways.

There was also a poor understanding of what career options were available in the sector. We are committed to working with industry leaders to tell the positive stories about the sector to help change these perceptions.

Several areas of work from the New Zealand Industry Transformation Framework had been prioritised and taken forward since the launch last year, including on risk management and improving information flows and data.

It was clear given recent events this work was of some urgency. Lessons could be learnt from other successful New Zealand sectors — for example, moving forward by focusing effort on areas of agreement rather than those where there was not consensus.

A key development since the last Forum was the formation of the Vertical Construction Leaders Group under the auspices of the Registered Master Builders Association.

This group brings together the chief executives, managing directors and general managers of the country’s leading commercial construction companies. The group continues to grow, and currently has more than 30 members.

The Vertical Construction Leaders Group was originally founded to work towards standardising Health and Safety policy and process across the industry.

Due to the success of this approach, the group’s mandate has been expanded to provide leadership in lifting standards of professionalism across areas such as risk management.

It was well received as a useful starting point for companies to assess the potential risk in standard commercial contracts, which include special conditions and amendments.

The RMBA will continue to update these guidelines and communicate with the sector.

There were several areas which Constructive participants will be updated on, including risk management, technology, BIM and ECI.

Participants are looking forward to working with other industry-related groups and, since the Forum, other groups in the sector have indicated a strong willingness to advance the reset that the industry so clearly needs.

Participants are looking forward to working with the Society of Construction Law on a series of panel presentations to be held in the main centres involving key industry representatives on risk allocation.

RMBA chief executive David Kelly says the Forum was a continuation of the collaboration sparked by inaugural Constructive Forum participants.

Meaningful and genuine collaboration, relationships and partnerships were consistent themes throughout the Forum.

Leaders at Constructive 2018 reflected frankly on the current state of the sector, but also looked with optimism at the transformation that was underway to build a more collaborative and sustainable industry.