Home Latest News The dawn of the ‘Super Ute’ 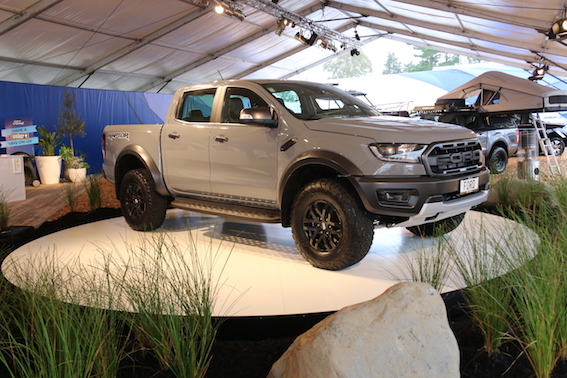 Now that Ford has rocketed into the dominant sales position with the Ranger, the question facing the Blue Oval is: what’s next?

How long will the national love affair with the ute as a replacement for the family sedan last? It’s already showing signs of shifting towards a customer preference for the SUV.

As far as a tools-of-trade vehicle goes, the ute will always have its place. But as for being a vehicle of personal choice, well, the ute might have limited appeal, which explains why we are starting to see the super utes — utes Jim, but not as we knew ‘em . . .

Claiming the most media mileage is the soon-to-launch Ranger Raptor, a vehicle based on the Ranger — as the name suggests — but powering the Raptor is a new 2-litre Bi-turbo, four-cylinder diesel, generating 157kW and 500Nm through a 10-speed automatic.

The Ranger Raptor is tagged for an RRP of $84,990, putting it close to Holden’s entrant in the super ute race — the Colorado Extreme, though this is more of a cosmetic powerhouse.

The $79,990 price gives you a stylishly painted ute with a winch bar, bash plate, genuine ARB winch and wiring harness.

The HSV-tuned ute has no engine mods at all. Apparently, HSV wasn’t allowed to meddle with the 147kW/500Nm, 2.8-litre DURAMAX diesel, so are we looking at aesthetics alone?

Well not quite. HSV was able to play around under the ute, which means the chassis, suspension, brakes and wheels have all seen a tickle up.

The front grille is different and LED lights have been included, while a decoupling antiroll bar at the rear (automatically disengages in low range 4WD) improves wheel articulation.

HSV has specified a quick release and locking hard lid system for the tray, with provision for load rails and a soft shut tailgate.

All this plus some serious in-cabin upgrades and you are looking at $73,990 for the manual entry-level SportsCat with the self-shifter clicking in at $75,990.

To really make a positive statement (see what I did there?) though, you’ll want the SportsCat+ which will set you back some more pesos — $80,990 for the pot stirrer and $82,990 for the 6-speed auto.

And then we have the Euro entrant. Yep, the Volkswagen Amarok in Aventura spec’.

This one’s a little odd, because it’s a ute you can specify without any form of “golly, that’s different”, outside of it being a ute with a German badge on it.

No, the Aventura is a regular ‘Rok, which just happens to be able to validly claim the biggest engine power output and the greatest Newton Metre-age of torque, albeit for a limited time only, as the phrase goes.

The Variable Geometry turbo has an overboost function, which squeezes another 15kW out of the engine and increases the torque commensurately — for about 10 seconds.

Still, 180kW for 10 seconds or so is going to put the Amarok well ahead of the competition.

The V6 engine runs across three models in the Amarok range, but the Aventura is the dog’s bollocks. And at $85,990, those are pricey tackle berries.

So, the dawn of the super utes has arrived, but absent from the list are three conspicuous brands — including Mitsubishi, which upgrades the Triton ute every time a sale opportunity arrives.

Nissan is also sitting quietly, but with a new Navara about to surface for its launch in September, there might be something Nismotic in the wings.

Lastly, there is no sign of Toyota with a herculean Hilux.

We can speculate though, given the huge number of high-powered vehicles in various racing disciplines running Toyota gear, that a Super Lux might yet become a formidable reality. We know they can — the question is, will they?

So, as you load up your workhorse, scratch the paint, splash it in mud and generally beat the stuffing out of it on a daily basis, there are a few options for when you win Lotto.