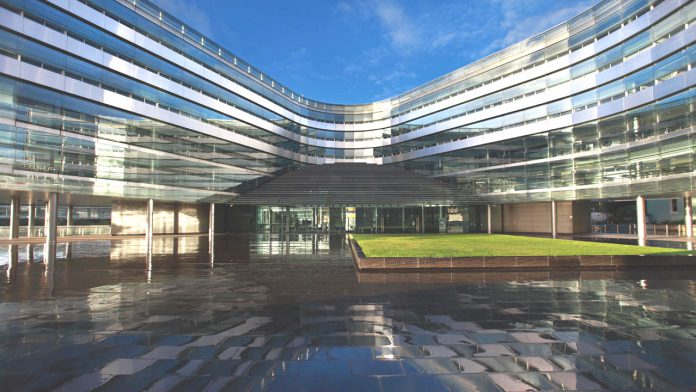 The distinctive six-storey, stainless steel and glass structure, crouched between tree-lined Symonds Street — the major artery through the University’s city campus — and the Auckland Domain, can accommodate 2500 students, extends 80,000 sq m above and below ground including the car park, and has won numerous architectural awards.

The building houses fully-equipped lecture theatres, computer labs, work rooms and social spaces, along with a cafe and on-site bank, clustered around a spectacular 26m-high atrium.

Investment in the future of New Zealand

“Ten years on, in this age of disruption, the need is even greater for business schools to nurture a new breed of graduate,” he says.

“In other words, a graduate who’s innovative, entrepreneurial, business-savvy, globally connected and capable of having an economic and social impact.

“This world-class building symbolises and facilitates this.”

“Our home is an award-winning, purpose-built building. It is a place of light and learning, where business, academia and government come together to help shape the future of business in New Zealand,” she says.

Designed by architect firms Francis-Jones Morehen Thorp (FJMT) and Archimedia, the Sir Owen G Glenn Building was completed in 2008, and has won numerous awards, including an NZIA Auckland Architecture Award, and was shortlisted at the World Architecture Festival Awards.

Archimedia principal Lindsay Mackie says the architecture “creates a series of organic, flowing ribbons in a gesture of invitation, outreach and optimism”, and recalls that the builder compared its construction challenges to “climbing Mt Everest”.

The Labour Government of the day contributed $25 million, with matching donations from philanthropists, trusts, foundations and businesses.

Donors, staff and friends of the Business School attended a celebration to mark the anniversary.

It was announced that funding from Sir Owen would pay for new scholarships for up to 10 undergraduate students to spend a semester each at universities in the United States and China, along with a stint in Hong Kong.