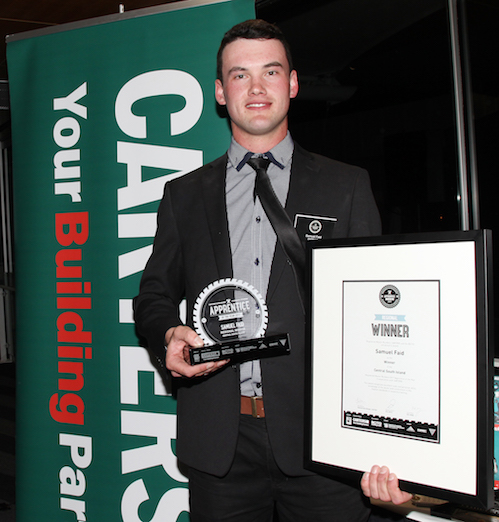 Sam, who is employed by Jina Andrews Construction Ltd, says he was humbled by his victory.

“There is great building talent around Christchurch, so I knew the competition was going to be tight,” he says.

“When I heard my name called out for the top spot I was really surprised. It was a very exciting achievement.”

Sam says his boss encouraged him to enter the Apprentice of the Year competition, and that the win has helped him with his career progression.

“My boss told me I was doing really well for the stage I was currently at for my apprenticeship, and that the experience would be really beneficial for my future,” he says.

“The competition win has given me the opportunity to connect with people in the industry I wouldn’t normally get the chance to, such as other builders taking part and the judges.”

The most challenging parts of the competition for Sam were the pressure of the practical challenge, and answering the questions from the judging panel at the national competition.

“When you have hundreds of people watching what you’re doing, and you look over to see the clock ticking away, the pressure definitely starts to set in,” he says.

“In the interview stage, the judges fire questions at you so you really have to think fast on your feet and answer them as best as possible.

“Although it was a challenge, it was a rewarding experience overall.”

The judges said Sam did a stellar job throughout the competition, completing each component to a very high standard.

“After speaking with Sam’s employer, it is clear he has a skill level and passion beyond his years. Sam has an exciting future ahead of him in the industry.”

Sam recognised the contribution that Jina Andrews Construction had made towards his development as a builder.

“The team at Jina Andrews Construction have massively supported me throughout this journey. When I told them I was entering the competition, they took the time to teach me extra skills and answer any questions I had.”

Sam advises other apprentices thinking of entering the competition not to hold back, and to make the most of the opportunity. “Nothing ventured, nothing gained,” he adds.

Apprentices, employers and young people aspiring to be part of the construction industry are encouraged to join the Registered Master Builders Facebook page at www.facebook.com/registeredmasterbuilders.