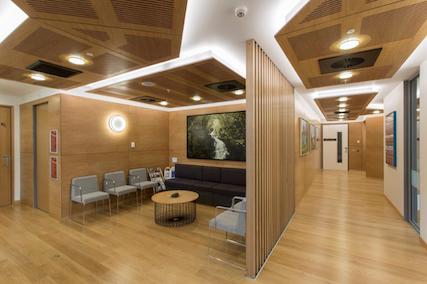 Naylor Love’s commitment to quality craftsmanship has won them the Altus Health Award at the 2018 New Zealand Commercial Project Awards for their Manaaki by Mercy project.

The project involved a total refurbishment of the building, owned by Mercy Hospital Dunedin, which houses a surgical facility and chemotherapy unit.

Naylor Love director Ian McKie says the team was ecstatic with the win.

“Overall we were very happy with the result. Our client also really appreciated the win,” he says.

The team had to overcome several challenges throughout the build, which Mr McKie says helped it stand out from the competition.

“We had the challenge of working within an extremely tight construction site, all while making sure the hospital operations could continue,” he says.

“We believe the end result for our client was first class.”

Commercial Project Awards judges commended the project for its exceptional quality and exemplary workmanship. They also acknowledged the high level of technical skill that was needed for the complex build.

“The project required up to 60 workers to be on the severely restricted site at any one time, working around an existing protected tree and with a four-metre excavation. Despite this, the project was brought in on budget, and to a very demanding timeline.

“The resulting building sits comfortably and effortlessly within its neighbourhood. It is a project everybody involved in can be justifiably proud of.”

Naylor Love is member of Registered Master Builders Association, a relationship which Mr McKie says is highly valuable for their company.

“Being part of the organisation that represents the industry has been valuable for improving our brand image and awareness.

“It has also allowed us to be a part of the Commercial Project Awards, which has been great for us to showcase our range of projects,” he says.

“For us, the biggest benefit overall is having the industry body supporting us at a national level wherever we need it.”

This achievement for Naylor Love follows a series of previous successes at the Commercial Project Awards. Their Dunedin projects alone have won four national awards, alongside two Supreme awards.