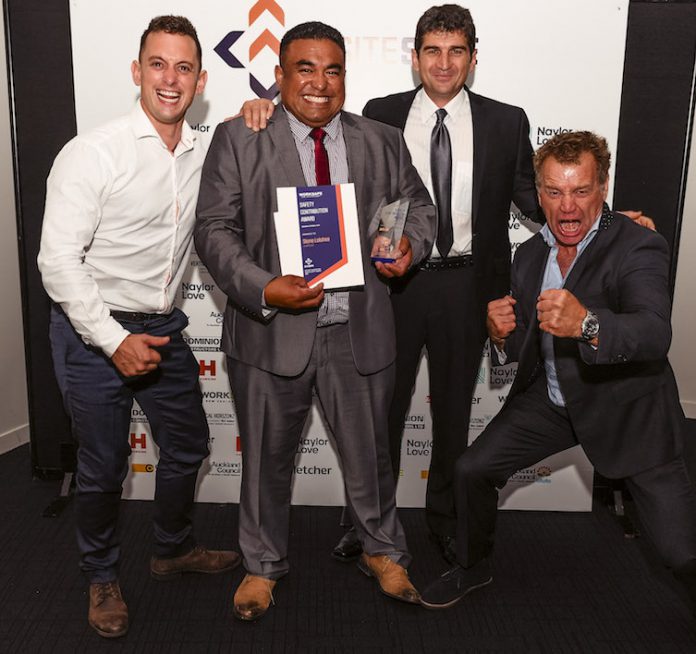 Businesses and individuals leading the way in health and safety have been recognised at the Site Safe Evening of Celebration, held at Alexandra Park in Auckland on November 7.

The annual event attracted more than 350 guests, and announced the winners of the 2018 Site Safe Construction Health and Safety Awards, as well as hosting the Site Safe Certificate in Construction Site Safety graduation.

Sione Lolohea took out the WorkSafe Safety Contribution Award for leading and inspiring a dramatic culture change at APS Ltd.

The judges said it was great to see businesses empowering people such as Sione to become leaders and true safety champions.

“As a role model for staff, Sione has made an invaluable contribution to the health and safety culture at APS,” they said.

Mr Lolohea has gone on to pave the way for a raft of improvements in the company’s safety culture, bringing a new level of realism and connection to the team’s height training.

He has been instrumental in developing new safety products, including design improvements to roof anchors and APS’ PPE safety kits.

The judges said this clever idea eliminates a significant risk by isolating workers from the activity, and saves time and money.

The frame removes the need for operators to work in the trench, eliminating the risks of engulfment, noise and manual handling.

Pipeline and Civil was awarded the Teletrac Navman Safety Leadership Award for its leadership-led approach to health and safety culture.

The judges said the dedicated and hands-on approach to health and safety shown by the management team at this small business is truly impressive, and was one of the strongest applications they’d ever seen.

Led by its directors and managers, Pipeline and Civil has made a raft of improvements to health and safety. Leaders at the business have led by example and demonstrated their care by being on site with workers to review safety processes and procedures.

The judges said it was a compelling DIY idea — simple but effective, it reduces injuries, delivers unexpected benefits and has the potential to be used in the wider industry.

Designed by the crew on the ground and nicknamed the “shaker”, the device eliminates the need for workers to use heavy-duty hand tools to remove rock cores from drilling barrels, reducing manual handling injuries and exposure to noise.

Total Traffic Management received a Judges Special Mention in this category for its illuminated stop/go sign, which has more than doubled the visibility of road workers.

This year Site Safe had a record of more than 320 graduates, many of whom attended the official graduation ceremony at Alexandra Park.

By participating in a range of Site Safe courses, students earn NZQA credits towards the Certificate in Construction Site Safety qualification, which leads to lifelong learning and the development of leadership skills in health and safety.