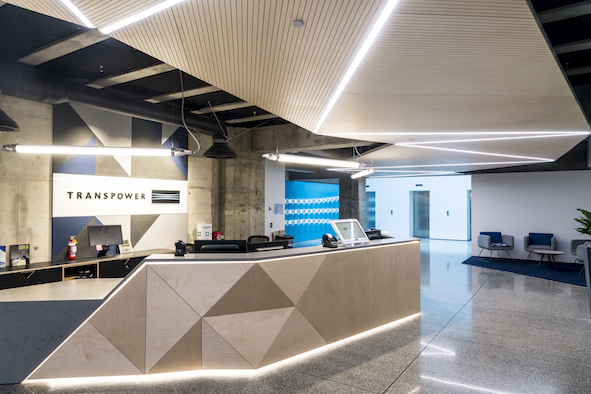 “After such a long and challenging project, it was great to gain recognition for our work,” McKee-Fehl Constructors project manager Helen Moate says.

Ms Moate felt the project stood out from the competition due to its complexity, with the project combining multiple buildings each with different structures from across the past century.

“This meant there were a variety of things to consider when strengthening and reconstructing the buildings to make it feel whole again. This was all while retaining the original character of the buildings.

“We ended up using existing and new structural elements to create an architectural aesthetic that embraced both the new and old.

“We had a strong vision for the project, but with the many structural unknowns, we had to constantly be creative and adapt our plans.

“Another challenge was that our client, Transpower, required a co-ordination centre that could operate continuously regardless of any event.

“The final build had to be resilient enough to withstand disruptions from power outages or natural disasters.”

“The buildings were stripped right back to their frames, carving out an atrium, strengthening and adding extra floor space,” they said.

“The multiple buildings were knitted together into a cohesive whole with big open floor plates, despite multiple mismatched floor levels.

“The result is a delightful and characterful workplace, which anticipates achieving a five Green star rating.”

Ms Moate says the award helps her company be recognised beyond the Wellington region.

“For us it’s a huge validation of what our designers, engineers, site team members and apprentices can produce, and how effectively they work. Seeing that recognised nationally is important to us.

“While this project has done well in other competitions, the construction focus of the Commercial Project Awards was especially important for us to excel in. It provides the peer recognition within the industry that we really appreciate”

The award follows several successes for McKee-Fehl Constructors at the Commercial Project Awards.

In total, they’ve won seven awards in the competition over the years, including two Restoration Gold awards.