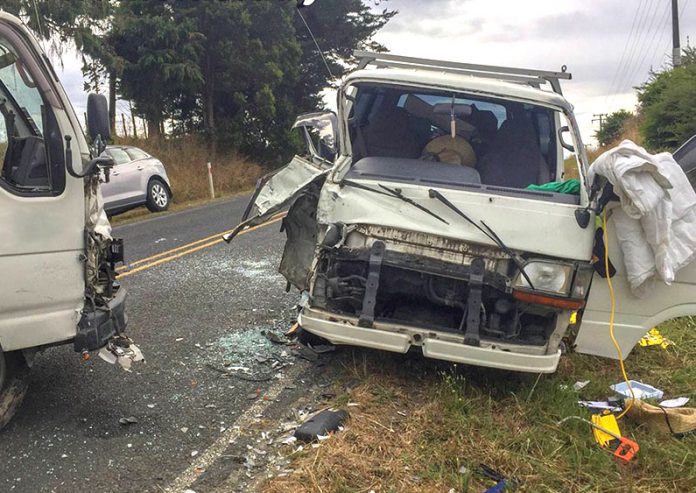 Sometimes the biggest threat to people in a head-on crash is all the things that are behind them.

A collision in Hamilton between two vans last month saw Waikato police warning tradies that unsecured tools and cargo can become painful, if not deadly missiles, in an accident.

In a Facebook posting about the crash, the police said wood and tools came flying out of the van as it collided with another vehicle that had crossed the centre line.

“Upon impact, the contents of the Toyota Hiace (including tools) have come flying forward towards the driver and his passenger.

“If you are a tradie or own a company, this may be an opportunity to consider any improvements that you can make (in case of an emergency).”

The van driver later said it wasn’t the wood that broke his windscreen, but accepted that several tools had gone rogue. He said four tools — a clamp, a glue gun, hack saw and multi box — flew out of the window, but they were the only things that were unsecured in the van.

The gravitational force (g-force) on people and objects during collisions at about the 50km/h mark is usually around 20 to 25 times normal.

So, for a brief instant, even a 1kg water bottle will have the force of 20kg to 25kg as it flies forward until it hits the dashboard, the windscreen, or the back of someone’s head.

There are several ways to minimise the risk from such things happening. Keeping them secure is one, and keeping tools and materials separated from people via a cargo barrier is another.

Of the current range of cargo barriers available, the range from Australia’s Milford Industries is one of those that meets the NZS4034 standard for cargo barriers.

Properly fitted barriers, as well as protecting people from fast-moving objects, may also offer extra protection if the vehicle rolls.