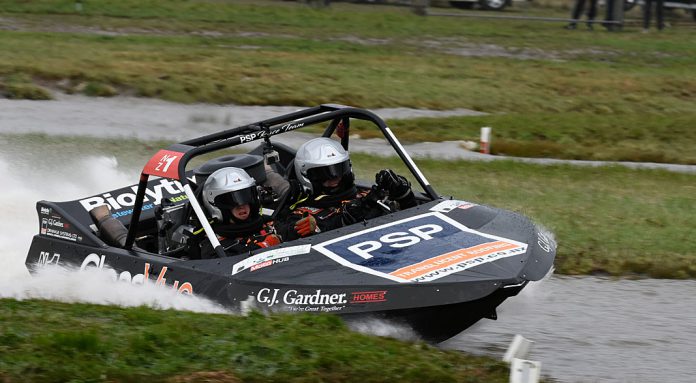 The finale of this year’s Mouthfresh New Zealand Jetsprint Championships was held at the picturesque Wanaka jetsprint track recently, with the PSP Jetsprint team qualifying for the Top 6 and securing the NZ Group A Championship for the third year running.

PSP Ltd markets and distributes flat plastic and other sheet products for the construction industry throughout New Zealand.

The race day weather forecast was not promising — even a two-layered race suit wasn’t enough to keep warm, with wind and rain contributing to the freezing conditions.

There was a fresh rotation which had plenty of technical elements, and by the end of the day the water level had dropped significantly, which demanded that contestants stay centre track or risk running aground.

In the Top 9, both of the team’s rear fins were flattened thanks to the Wanaka schist. This made the boat difficult to control as the rear was sliding uncontrollably around corners, but the team still qualified in fifth place for the Top 6.

The crew worked hard to fit new fins, straighten the rear of the boat and check over the jet unit, but unfortunately the team’s day would end one elimination round short of where they wanted to be.