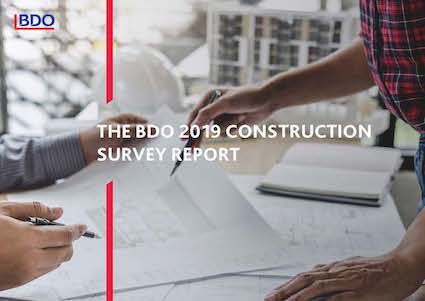 The 2019 report identifies positive developments and some concerning trends, including:

• An improvement in gross profit margins

The 2018 survey showed that 54% of head contractors were missing out on winning projects at margins of 6% and below, which is not sustainable for those companies.

Those winning projects at those low margin levels have now dropped to 35% of companies, which is still too many. For them, the race to the bottom seems to be continuing.

The proportion achieving margins over 8% has increased from 28% to 42%.

The improvement has flowed through to subcontractors too, with those earning a margin below 20% reducing from 78% to 53%.

This trend is reassuring from the perspective of survival of the sub-trades, as one of the greatest challenges for everyone is the availability of companies and people to do the physical work.

• Cashflow is becoming a greater challenge

One-third of respondents indicated that cashflow was becoming a greater challenge for them. Bank Performance Bond security and the retentions regime are tying up additional cash resources that the industry needs.

One in five found getting paid in time was a big issue for them. Margins are insufficient to quickly resolve these challenges.

• The industry is getting to grips with the retentions regime

Encouragingly, only 7% “prefer not to confirm” they are complying with the retentions regime, compared to 28% last year.

But of those few that actually inspect that their retentions are being held in trust, nearly half found instances of non-compliance.

A number of the actions being taken to protect businesses from these risks are outlined in the BDO Construction Survey 2019 report.

• Sustainability a “nice to have” rather than a reality

The overwhelming response was that clients wanted to be sustainable but were not prepared to pay for it.

• Many businesses do not have a succession plan

Only half of those surveyed aged over 50 had made progress on a succession or exit plan, presenting a huge risk to the industry.

43% of survey respondents found their management reporting to be limited or lacking.

Given the pressures on margins and cashflow, accurate reporting is a fundamental prerequisite to a sound business.

• Forward work is feast or famine

There are mixed messages in relation to forward work. While the industry as a whole is forecast to continue to grow, our analysis of forward work indicates that, overall, there is less forward work than a year ago.

It seems to be feast or famine, with the South Island showing greater signs of weakness.

BDO construction and real estate head James McQueen says factors such as the capacity to provide performance bonds are separating the construction industry into two segments — the good operators with robust businesses and those that are fragile and susceptible to failure through bonding, cash, resources and other significant constraints.

“At many levels there is still too much pressure on lowest cost, irrespective of the consequences,” Mr McQueen says.

“It is apparent that more people now realise the folly of this, but there always seems to be someone desperate enough to go lower than is sensible, and take risks others avoid, in the mistaken belief they can stay in business indefinitely.

“The sector as a whole continues to grow, and forecasts of future projects support the opportunity for further growth.

“However, in addition to the issues identified above, there are other significant industry-wide challenges, with respondents particularly concerned about staff issues, bureaucracy, the economy and future workflow.”