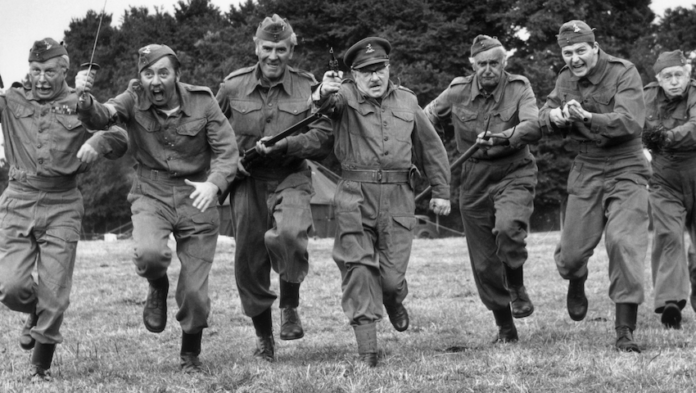 Building Today columnist Ross Middleton sees a Dad’s Army irony in all the blather around Covid as it continues to disrupt. “Permission to speak sir . . .”


If you are approaching a set of traffic lights anywhere in the world, turning red means stop. In Aotearoa though, it generally means speed the hell up and break through on the buzzer.

In fact, our laissez faire attitude to traffic lights was noticed by our government where colour-coded pandemic restrictions can mean . . . well, who knows, but go for the gap anyway.

This may very well come back to bite the powers-that-be on the bum as the latest variant of coronavirus-SARS-coV-2 takes hold of our society.

Designated to be “Omicron” by the World Health Organisation, it conveniently missed the Greek letter previous, “Xi.” You gotta wonder why.

The Omicron variant (I write this at the start of February) is building here, and is apparently more infectious than laughter at a Billy Connolly concert. But while Billy might cause you a few stomach pains, he won’t make you crook, and he won’t kill you.

Yet, despite its seriously deadly nature, there is plenty of irony to be found in our current pandemic.

Who would have thought that an organism so small it can only be seen through a powerful microscope could have such an influence on the planet’s dominant species?

Its cunning adaptability reminds me of Muhammad Ali, mesmerising his opponents by gently swinging one hand in soft circles down by his waist while viciously punching them in the face with the other. But Cyrus the virus already has several other challengers lined up for the fight.

What I find ironic is that the underlying ethos in media, government, and even implied by the boffins, is “let’s get through this wave and into the clear water ahead”.

Somehow I don’t think Cyrus sees it that way, and he has plenty more swinging tricks in that spiky glove.

But don’t panic. In an uncertain environment, more long-term planning is needed and business, as is becoming more common these days, will be leading the way, unless of course that initiative-taking way is blocked by bumbling bureaucracy.

As I write, Omicron is already here and we are about to start assessing the damage.

Media have been reporting on panic buying, stockpiling, dire shortages in health infrastructure and numerous other crisis planning issues across the country.

While this version is one of the most transmissible viruses ever detected, infecting some with double-vaccination protection and easily evading ad hoc number eight wire masking, local media have been absolutely ga-ga over the click-baiting opportunities available.

It’s all out of the Rupert Murdoch Playbook for Idiots; selling news like groceries in a supermarket.

As I see it, the bottom line is that this is something we all have to work our way through with calm minds and careful planning — not perfidious, pre-meditated panic. At least the hard work of the Government has meant little health damage to date, and given us the ability to scrutinise situations elsewhere and plan accordingly.

Unlike Australia, for example, where the sudden realisation that letting ultra-contagious, debilitating diseases run rampant is actually worse for the economy than public health restrictions.

Construction businesses (like all the rest) in New Zealand have a long list of imponderables to consider daily, including:

• how Omicron will behave in an, until recently, largely untouched community,

• what the long-term effects on the business will be and,

• in the shorter time frame, how many of the team will be infected or compromised by regulatory dictates, and how to compensate for that while continuing to operate, identify supply chain weaknesses, and solve these issues with the Government and health department seemingly determined to obstruct and obfuscate.

Fingers crossed behind back, Bloomfield asserted he didn’t steal, requisition or commandeer RAT tests. Authoritarianism can be a dangerous thing.

Even the most moral and mild mannered can start out with the best of intentions but the corrupting effect of power (think Mugabe, Modi and Mussolini) means they can end up somewhere else entirely. After the latest tough-guy gaffe, that halo is starting to look a little rusty.

Businesses that have stayed ahead of the game with their planning have had incompetence and prevarication slap them in the face.

Elsewhere, there is high dudgeon all round: “It is a stunning indictment on the government’s incompetence that having banned rapid antigen tests for most of 2021 and then failed to order enough themselves, they are now seizing rapid antigen tests ordered by the private sector,” the opposition spokesperson for Covid says.

Maybe government is taking a “just-in-time” leaf out of a workplace manual? At least we are learning from the disasters in Australia where incompetence has been on high-rotate on the bureaucratic playlist.

Prime Minister Scott Morrison epitomises this. At least ours gets important things right, and has the linguistic turn-of-phrase to paper over any cracks.

Morrison’s answer to the labour shortage created by sickness and isolation rules was to have children driving forklifts. In my time in this industry I have seen injury and death caused by even well-trained forklift drivers.

After he finished wiping the egg off his dial, Morrison uttered one of the great lines of the pandemic: “We agreed to proceed no further with the issue of 16-year-old forklift drivers.”

We can also learn in other areas. The Australian Federal Police is hot on the trail of retailers price gouging RATs. Prison and massive fines are on offer.

At least we seem to be past the old lockdown-and-mandate mentality. Our industry shouldn’t see the absurd situation we saw in Melbourne last September where construction workers, activated by a short-sighted union, protested over mandatory vaccination on worksites across the city.

This saw some 2000 angry young blokes allowing themselves to be infiltrated by the local Nazis and other right-wing extremists, leading to Molotov cocktails, rubber bullets and tear gas at 20 paces.

The union back-pedalled as fast as it could but the damage had already been done, and the unfortunate fray became a key spreader of the dreaded lurgy.

Issues for the construction community here instead are something of a perfect storm, with a runaway build-now market impacted by lack of materials and exacerbated by a dearth of human resources.

The unemployment rate remains near rock bottom, down to 3.2%, while the under-utilisation rate (I think that also includes all those assiduous watchers of Game of Thrones reruns) is at 9.2%.

On top of all this there is remuneration, with average hourly earnings at $35.61 and rising, adding to mounting inflationary pressures.

Expect workers and their unions to be lobbying for even more dosh and other “extras”. They need it. Their costs are through the roof too.

No need to panic, but we should revisit the short-term influence of the

Bug. As seen globally, with our expected rapid spread of Omicron, further challenges on building sites will occur when key staff members are required to isolate after being deemed a close contact of a Covid case.

This could highlight further issues around time extensions, costs and just who is paying the wage bill.

The Construction Sector Accord has released advice on Covid construction risk management, which may be a helpful starting point.

The Government will be trying to keep its powder out of the rain as it ducks and weaves its way through this one: Captain Mainwaring charging, pistol askance, and Corporal Bloomfield avowing, “There is no substitute for cold steel. They do not like it up ’em.”

They will be hoping the proletariat won’t panic either, though the emptying supermarket shelves give the lie to that one.

As one economic adviser says, “Supply chain disruptions are a massive headache. Optimists say that things will normalise by the middle of next year but, even then, New Zealand will probably be at the tail end . . . that means disruptions here could last longer than elsewhere.

“Supply-side indicators will hold the key to understanding the inflation outlook. That’s not something we’re used to watching closely, and the data is a bit patchy. But we can look at shipping costs and delays, port wait times.”

So where to from here for Cyrus?

World Health Organisation head Tedros Adhanom Ghebreyesus believes the emergency phase of the pandemic is still very much here, but . . . “It’s dangerous to assume that Omicron will be the last variant, or that we are in the endgame. On the contrary, globally, the conditions are ideal for more variants to emerge.”

In the long run, many of us might apparently experience a mild infection every few years, as with other coronaviruses. Most of the scientific reasoning currently is that the virus will become endemic, meaning it will still be around, circulating in communities with occasional outbreaks.

The comparison made is to seasonal flu, so while it is still bad and still kills, the world won’t tilt on its access.

If you want a tilt at the bigger picture, think about Russia’s geopolitical agenda, China’s blunt self-interest, financial market collapse, the imploding American dream, or your flooded worksite.

Whatever you do, don’t panic! Dad’s Army is here to help.