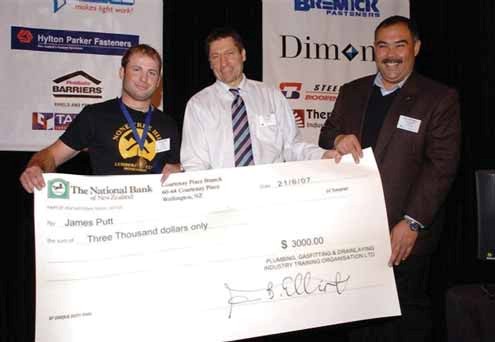 James Putt of Matamata has received the 2007 Dimond Award for Excellence in Roofing at the annual conference of the Roofing Association of New Zealand (RANZ) in Auckland last month. Dimond general manager Brad Bridges presented the award and prize money of $3000 to James, and summed up by saying the award was easy to support.

“Dimond believes in supporting industry and encouraging excellence in roofers. I am delighted to hand over this award to James who clearly demonstrated great leadership and skill during his metal roofing and cladding apprenticeship.” James, who works for Comag in Matamata, was clearly delighted with his medal and financial windfall. ‘Just awesome’

“This is just awesome. It was unexpected and just great to win. I am really looking forward to the next few years, as I just want to keep learning and improving my work.” Plumbing, Gasfitting, Drainlaying and Roofing ITO chief executive Ian Elliott says the ITO is delighted James won the award. “The pursuit of excellence is a key component of how Dimond and the ITO both work,” he says.

Dimond and the ITO set up the award in 2005 to promote and support quality work in roofing. It is awarded to the apprentice who demonstrates an excellent standard of practical on-site workmanship, great communications and leadership skills.

He or she must be a team player who works well together with colleagues and the community. The winner must be within the top range of practical training and competency assessments gained during their off-job course.

James, who started his apprenticeship with Comag in Matamata, typifies the hard working dedicated apprentice. Comments from colleagues, tutors and judges include: “James is innovative and dedicated. He is committed and hard working. James works well with others, leading by example.” Comag has recognised his talent and dedication by inviting James to join the company as an owner/working director.