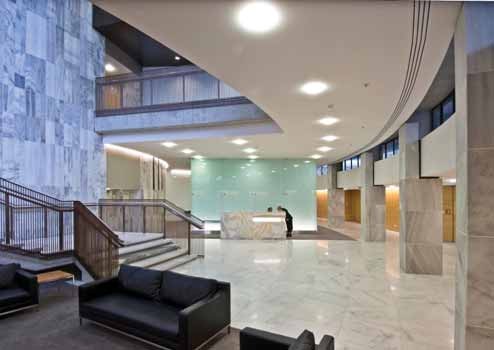 McKee Fehl Constructors Ltd knew they had created something special when they completed work on the Executive Wing, an integral part of New Zealand’s most high profile building, the Beehive.

Managing director Maurice Clark maintains that McKee Fehl’s pride in their work was cemented when the company was named a national winner of the QBE Retail and Business Award in the RMB 2007 Commercial Project Awards, in association with PlaceMakers.

“Our strong relationship with Registered Master Builders was the reason we started entering the competition, but it soon became apparent it was a fantastic way of marketing our business, and boosting the morale of our team,” Mr Clark says.

The Executive Wing project was in the specialised field of restoration and refurbishment, with the first four levels of the iconic, 30-year-old Beehive buildings completely redesigned and refitted to meet modern demands in the Beehive Stage II project.

Outdated linings and furnishings were removed and each level was stripped back to its bare structure so architects Warren and Mahoney could develop their vision from scratch. There were a number of crucial elements that McKee Fehl had to keep in mind during the construction process. They had to enhance the safety and security of the structure but minimise the affect the refurbishment had on the surrounding areas within the Beehive (which were in use throughout the construction process).

They were also responsible for ensuring the restored Executive Wing fitted with the overall design aesthetic of the rest of the Beehive. The most obvious challenge they encountered was the shape of the building. Being circular there were hardly any straight lines, which became a constant challenge for the McKee Fehl team.

When asked what is so special about the project, Mr Clark is happy to go into detail about its many extraordinary aspects. The striking webbed ceiling with concealed lighting was fully created off site at a fibreglass canoe-makers’ shop. The banqueting chamber was also completely reconstructed using original tawa slats that were lifted, refinished by hand and re-laid in one of the most labour-intensive parts of the refurbishment.

Winning a national RMB Commercial Project Award affected the company in many positive ways. After working to ensure they got everything perfect first time, the team was thrilled when their efforts were publicly recognised.

The client, Parliamentary Services, who attended the national gala dinner, were also delighted with McKee Fehl’s achievement. “I would say our relationship with the client is very strong now,” Mr Clark says. As for prospective clients, “we can take them to look at the Executive Wing and the work speaks for itself — the quality is exceptional and the attention to detail is clear to see.”

The team at McKee Fehl has confirmed it will be entering the RMB Commercial Project Awards this year, but is yet to decide which project to enter. Mr Clark says they will be aiming for a similar result to their performance in 2007 in the hope of again showcasing their company at the forefront of the Wellington commercial construction scene.