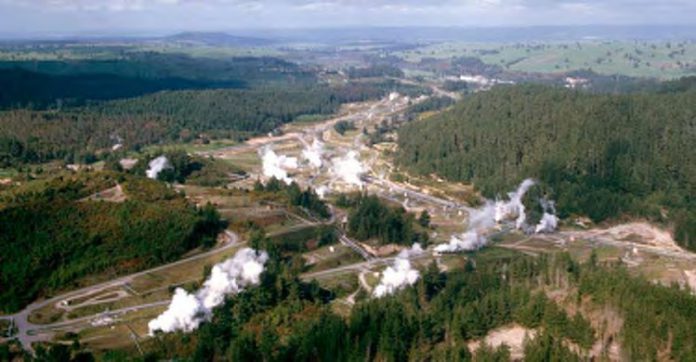 In the 1950s New Zealand was desperate for electrical energy. A succession of droughts had found the country’s much vaunted hydro-electric generation capacity wanting. Power cuts were the norm. Candle and kerosine sales were up. Industry and the rest of the electorate were not happy campers.

In the North Island the situation was particularly parlous. The proposed Cook Strait cable was mired in controversy. Opportunities for further hydro generation were limited. Coal-fired stations offered a solution but the 1950s waterfront troubles made Sid Holland’s government wary of anything involving the militant trade unions.

Geothermal energy offered a solution but little was known of our resource. Only Italy had successfully converted geothermal energy into electricity. Any attempt to develop geothermal in New Zealand from scratch was a high-risk enterprise, yet the power situation was critical.

The Government appreciated that while we lacked the experience and technology, it believed we had the engineers and scientists who could pull it off.
That today we can celebrate 50 years of successful, faultless, continuous operation of a major base load geothermal power station at Wairakei is a tribute to those 1950s Kiwi technologists.

Their first concern was to prove that sufficient quantities of steam were available at Wairakei. Initial bores confirmed the steam equivalent of 20MW of electricity in shallow 150-200m bores.

The final design of the Wairakei power station was constrained by the temperatures and pressures proving less than ideal.
The steam contained a high proportion of very hot water. To deal with this mix, the Kiwi engineers came up with brand new technology and built the world’s first pressurised steam/water separator.

They also invented a silencer to strip the upper frequency range from the literally deafening noise produced by bore discharge. The din could be heard 10km away, and borefield workers experienced severe headaches and dizziness.

In 1955 the go-ahead was given to our engineers and British firm Merz and McLennon to design New Zealand’s first geothermal power station. Just three years later, on 15 November 1958, electricity was fed to the national grid for the first time from one of the 6MW generators at the brand new station.

While it was the second geothermal power plant in the world, it was the first to use very hot water as a steam source to drive its turbines. Full operation was achieved in October 1963.
Since then, Wairakei has operated continuously, apart from three months in 1968. Unlike hydro or fossil fuel stations, geothermal plants run 24/7. Engineers hate to shut them down as they are damn hard to start up.

As such, Wairakei is an important base-load station of New Zealand’s national power system. If you get up at 2am to make a hot drink — or even recharge your electric drill — there is an even chance your electricity is coming from Wairakei.
The station operates at better than 90% of maximum output, with an efficiency for converting heat energy to electrical energy of 37%, comparable to many newer geothermal plants around the world. Wairakei is a great example of 1950s Kiwi Can-do.

The development of Wairakei owes much to the absence of any Resource Management Act in 1950s New Zealand.
At that time we were not a country obsessed by environmental sensibilities. The public’s sole concern was for electricity that allowed them to turn on their new-fangled TVs and make a cuppa during the ads.

Although geothermal power had been sold to the public as a clean energy source, it comes with a host of built-in environmental issues. At Wairakei the extraction of massive amounts of hot water saw the world famous geysers of nearby Geyser Valley shut down. They have never restarted.
Subsidence affected the surrounding land and, in places, exceeds more than 10m. And the power authorities came to accept that discharge of spent water was detrimental to the Waikato River.

In 1978 they commenced re-injecting spent water back into the geothermal system. Today, some 46,000 tonnes of spent fluid are returned to the reservoir each day. This re-injection helps increase reservoir pressures and reduces subsidence.

Today the Wairakei Power Station is owned and operated by Contact Energy Ltd. There are 54 bores in production, with an average depth of over 610m. The two powerhouses have installed capacities of 67.2MW and 90MW respectively.
The annual energy output accounts for 4.3% of New Zealand’s total annual production, or about 5% of the North Island’s electricity needs, sufficient to supply the demands of Taupo, Rotorua, Napier and Hamilton.

In 2007, Contact Energy won its six-year, million dollar legal battle for resource consents to continue running the Wairakei station. Although approval had been gained in 2004, appeals saw the process dragged out in the Environment Court.

Contact is now proceeding with its plans to develop new geothermal power stations at the adjacent Tauhara and Te Mihi fields, with an ultimate goal of replacing the existing station.
The Wairakei power station is not usually visible from State Highway 1, but hikers in the scenic reserve across the river have an excellent view. Fossil-fuelled stations are visual abominations. Nuclear plants, those that are imaginatively designed, can evoke planetaria. The Wairakei power station is somewhere in between.

It is “all right.” The fierce noise levels (up to 90dB) that permeate its interior, the reek of H2S that seeps off the roof and down into the offices of the station’s supervisory force, and the ugly pile of insulators, conductors and transformers that constitute a switchyard, are all tucked away from public exposure.
Even the transmission lines make a modest exit through a stand of stately pinus radiata . . . If a tramper on State Highway 1 pauses at dusk five miles north of Taupo on a moist day with a stiff breeze, he is treated to an eerie sight of haunting beauty. Scores of fleecy plumes arc skyward only to be seized and devoured by green demons that haunt the boughs of imperial conifers.

Bundles of silvery bull whips, cracked by an invisible giant who lurks behind the western hill, are caught in stop-action as they rise and fall in unison. It is an odd amalgam of technology and nature, of the Tin Woodsman of Oz and the Sorcerer’s Apprentice, gently underscored by the whispering, slightly syncopated “whuff-whuff . . . whuff-whuff” of the well-head silencers.