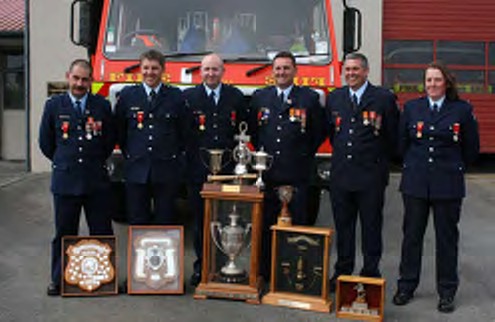 The New Zealand Fire Service provides emergency response services to communities across New Zealand thanks to more than 10,000 firefighters, 9000 of whom are volunteers. There are around 1700 career firefighters who work in 24/7 fire stations in metropolitan areas.

Based on these numbers, it’s obvious that volunteers are an integral part of the New Zealand Fire Service. In fact, a majority of New Zealand communities rely exclusively on volunteer firefighters to protect them from fire and other emergency incidents.

And there’s more than a few Registered Master Builders who make up these volunteer numbers, so we caught up with some of them to talk about what it’s like supporting their community through the local fire brigade.

Rod Triplow, manager of Gemco Joinery in Havelock North, has been with the Havelock North Brigade for 35 years.  “My brother got me into it because they were short of people who could be available during the day. I’d just started my apprenticeship locally so I knew I’d be available at a moment’s notice,” Rod recalls. “And it so happened that the business I was doing my apprenticeship with burnt down back in 1981 and I helped put out the fire!”

Rod has seen some big changes over the years in the training provided to volunteer firefighters. “When I first started out all those years ago, I turned up at the station, was given my gear and told if the siren went off I’d be expected to hop onto the truck and do my bit,” he says.

Nowadays, the Fire Service is a lot more safety conscious. All volunteers must go through the Fire Services’ Training and Progression System (TAPs) and complete a seven-day course before they are allowed to respond to any incident.

Every brigade also has a training officer on site to provide ongoing training and education. “We’re out there to preserve life, and the number one person to look after is yourself,” Bruce Mouldey, aka “FF Puff” from the Waipukurau Brigade says.

Bruce, who works for Waipukurau Construction, says when he started nine years ago, he had to complete all the training before he could get out there and fight fires. “I’ve done heaps of other courses since then, from using a chainsaw to dealing with chemical spills.” Training in Australia

Darrell Trigg, of Darrell Trigg Builder Ltd, is based in Ruakaka, just south of Whangarei. He’s heading off to Australia for a two-week officer course run by the New Zealand Fire Service which focuses on commander control of fire incidents, as well as specialist training on how to deal with different kinds of fires, such as liquid and fuel fires.

“Due to our close proximity to the Marsden Point Refinery, we must be trained to a certain level and deemed competent to deal with liquid and fuel fires,” Darrell says. “Although the refinery has its own fire service, we are here for back-up, along with the police and other emergency response organisations in the area.”

Being a volunteer fire fighter has many pluses — even Rod Triplow’s boss is reaping the benefits. Contribution to the community

“The boss sees my volunteer role as one of his business’ many contributions to the community,” Rod says. “They also get a certain amount back through the training we receive, such as the leadership courses and so on.”

Peter Blight from the Hokitika Fire Brigade runs his own business, Peter Blight Builders. He’s been with the Hokitika Brigade for four years, and is proud to be part of the winning team in the Regional West Coast Provincial Waterways Competition.

The annual competition brings firefighters from across the country together to compete for the national title. “We ran in nine different events using hoses, ladders, breathing apparatus and other equipment. It’s basically all about how to work together as a team, and we beat four teams from our region to take out the regional title,” Peter says.

These types of occasions call for lots of family support and activities which play a big part in the life of a volunteer firefighter. “One of the great things about the Fire Service and being a volunteer is the comradeship and family support,” Bruce says. Partners often disrupted

“Our partners are often disrupted when we have to take off in the middle of the night, and it’s only natural that they worry about you. So, once a year we send all the ladies off for a ‘ladies night’ to thank them for their support.”

“My family has grown up with it,” Rod says. “I was in it when I got married, and now my eldest son is a volunteer as well. I was also involved in the Waterways Competition for 20 odd years, and the whole family would make the trip to the competition.

“It’s no surprise that a lot of kids end up following in their parents’ footsteps, and it’s common to see father and son in the same brigade.” Darrell can’t say enough positive things about the comradeship and lifelong friends he’s made through the Fire Service. “I’ve made friends up and down the country, and they’re friends for life. There’s a great deal of mutual respect and support for each other, even at the competitions,” he says. ‘Knocked out cold’

“During the last round one of our team members was knocked out cold and guys from other teams didn’t think twice about offering to take his place so we could continue. There’s no animosity and it’s an awesome thing to be part of.”

But it’s not all just about competitions. These guys actually fight fires too! Darrell recalls when the Kamo New World caught fire back in the late 1990s. “A kid had lit fires in a few rubbish bins around the building so we had quite a large area to cover and it spread pretty quickly.

“I was following one of my guys into the main store when he was hit by falling debris and knocked unconscious. I had to drag him out to safety. Although it was certainly scary, my training automatically kicked in and I just did what I had to do.”

Rod, Bruce, Peter and Darrell are proud of their roles as volunteer firefighters, and are keen to see more people in the community get involved. “It’s also a great way to give kids something to focus on rather than getting into trouble,” Darrell says. “One of the locals approached me recently and pointed to a lad in our team, saying ‘you’ve no idea what you’ve done for that kid’.

He’d come from a troubled background and was heading down the wrong path, but getting him into the fire service and instilling some discipline and pride has really turned him around.” As you can see, being a volunteer fireman isn’t just about fighting fires and running in competitions. There’s so much more to it than that, and this is just a small sample of the great work our volunteer firemen (who also happen to be Registered Master Builders) do for our communities.