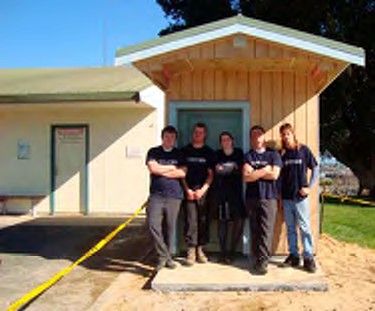 A group of students from Cambridge High School has won the national BCITO 2009 Build-Ability Challenge for a toilet they built for Te Awamutu Cemetery.

This is the third consecutive year that Cambridge High School has claimed the top award. A group of students from the school won the 2008 challenge for a horse hospital built for the local Riding for the Disabled Group.

The Build-Ability Challenge, now in its fifth year, is a nationwide secondary school-based competition requiring teams of students to construct a building project that is donated to a local community group.

This year, 36 schools throughout the country entered teams in the Build-Ability Challenge, more than double the number of entries in last year’s competition. The projects were judged in August by local BCITO training advisors, who gave scores for workmanship and finishing, use of materials and team dynamics. Each school also submitted a “record of work” which was assessed by a national judging panel to see how the students had documented the construction, presentation and budgeting processes.

Cambridge High School’s winning project was a unisex, disabled-access toilet which features natural lighting, ventilation and includes a baby changing table. It was also built in consultation with the Waipa District Council.

The judges said the project stood out as it was the only project entered that required and achieved building consent. They were very impressed with the way in which Cambridge High School made the project a real community affair, with input from local businesses, community groups and even support from the Mayor.

Waikato schools dominated the national competition. In second place was a Morrinsville College team for its construction of a picnic table for the pool area at their school. Third place was claimed by Hamilton Boys’ High School for a barn-style play house built for the local Argyle Preschool.

In addition to the top three awards, a “People’s Choice” award was introduced this year. Each Build-Ability Challenge team submitted photos and a short description of their project, which are available to view online at www.constructionzone.co.nz, enabling people to select their favourite project. The winner of the award will be announced mid-September.

BCITO chief executive Ruma Karaitiana is impressed with the success of the 2009 Build-Ability Challenge, which he says has assisted community organisations throughout the country. “It’s fantastic to be a part of a unique competition that not only teaches school students about careers in construction, but also provides much needed support to a wide range of community organisations,” Mr Karaitiana says.

The competition provides students with the opportunity to experience the reality of a complete building project, from the commission and design stages through to completion. Entries in the 2010 competition will open from November this year, and information will be sent to schools in due course.