Home Apprenticeships Building in the blood 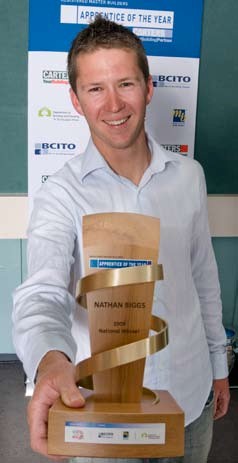 Hawke’s Bay carpenter Nathan Biggs had a “like father like son” moment recently when he took out a national apprenticeship award.

Nathan, whose father is also a builder, finished ahead of nine other national finalists in the Registered Master Builders 2009 Apprentice of the Year, in association with Carters.

The 25-year-old was presented with his award by Minister for Building and Construction Maurice Williamson at a ceremony in Wellington last month.

But Nathan took a rather circuitous path to his building career. He says when he finished secondary school he was more focused on getting a degree than following in his father’s footsteps.

“After finishing school I headed straight to university and got a degree in forestry management. It was after I had finished and was looking for jobs that I stumbled upon building again,” he says.

Nathan approached Mackersey Construction in Hastings to see if they had any short-term work available, and was taken on for a couple of weeks.

“At the end of my two weeks with Mackerseys I realised I loved building. It just felt right. My employer Mark gave me a call to tell me I should keep coming to work, and I haven’t looked back,” Nathan says.

He started his apprenticeship with the Building and Construction Industry Training Organisation (BCITO) in October 2007 and completed it in June this year, working at Mackersey Construction for the duration of his training.

Pete Hyde, Nathan’s BCITO training advisor, was the person who first introduced him to the Apprentice of the Year competition in 2008. However, because he didn’t meet the entry criteria last year he set his sights on entering in 2009.

Nathan says rather than being daunting, he found the regional competition a lot of fun.

“I love meeting new people so I found my interview with the judging panel really exciting.”


In Nathan’s judging interviews he spoke a lot about a major project he worked on this year — the Mangaroa Prison — which he said people were always interested in hearing about.

“Beyond the fact that it was a significant project with around 40 Mackersey staff, the nature of the project — being a prison — meant it was fascinating to be a part of,” Nathan says.
He took a leadership role on the job, working underneath the site supervisor as a junior foreman.

His responsibilities included procurement of materials, managing the builders on site, scheduling and supervision of subcontractors, attending frequent project meetings and acting as the heath and safety manager.


Nathan says one of the best things about entering the Apprentice of the Year is meeting the other apprentices.

“Especially at the national finals I had a great time meeting all the other finalists. We realised we were all very similar, and I really feel like I have nine new friends,” he says.

Nathan aims to eventually secure a top management job in a construction company, and is using one of his competition prizes, a Carters development grant, towards completing a quantity surveying qualification.

Mackersey Construction has supported him with this goal, and his role there has changed to include a lot more office time, giving him valuable experience at pricing jobs and with project management.


Prepare as much as you can


When asked what advice he would give to other apprentices thinking about entering the competition, Nathan says to prepare as much as you can.

“Read up on your projects and know them inside out. Other than that have fun, enjoy the process and be yourself.”

Entries in the Registered Master Builders 2010 Apprentice of the Year, in association with Carters, will open in April next year. For further information, visit www.masterbuilder.org.nz.