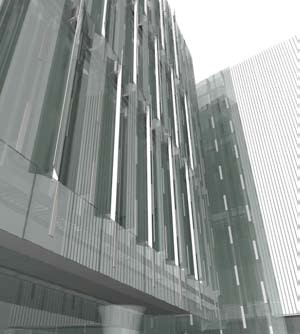 Samson Corporation general manager Marco Creemers says Green Star ratings are a natural progression for the company. “We think they’re the future and we’ve always used green initiatives to make a difference for tenants by keeping their operating costs to a minimum. At last there’s something to quantify this point of difference.”

He says Samson had always planned to achieve a Green Star rating for the Geyser building. “It was always going to be a Green Star building in our mind. We made a few additional changes to the project to ideally achieve a higher design rating. “For us the change hasn’t been particularly great, it’s just been doing things a little differently with a little more thought to choice of product and waste, and being prepared to invest more.”

He estimates Samson has invested around 7% more than in a normal building of the same scale. While filling the building in this economic environment will be more of a challenge than normal, he says the company plans its investments around downturns, and a more economical and healthy building is an important point of difference in a tight market.

“We’ve learned quite a bit through the process, but I think the contractors and consultants have learned more. “They need to invest in this area quickly or they will be left behind. We have had to drop quite a few New Zealand products because the suppliers won’t get the appropriate accreditation for their products. This has been disappointing.”

However, he is more positive about the trend in prices. ”The costs (of green materials) are coming down — the more people demand them and the more that suppliers respond, the more this will happen.”

For those thinking of developing a Green Star-rated building, his message is plan the project carefully and to go for a design rating that’s achievable. Geyser was designed by Patterson Architects Ltd. Tricia Love Consultants and Medland Metropolis provided Green Star NZ Accredited Professional Services.

Andrew Patterson of Patterson Associates Ltd says the achievement was a collaborative effort. “Dozens of people from a huge range of disciplines were involved, from structural engineers, electrical engineers, hydraulic service designers, and mechanical and facade engineers all working in collaboration.

“We wanted to make Geyser holistic, not just about accommodation and technical performance but also about expressing an Auckland sense of place for people,” Mr Patterson says. The building will have 5040 sq m of primarily office space, set above a 180-vehicle automated car park stacking system. It is due for completion in 2011. Geyser’s Green features Floor plates are divided into five individual sub-buildings set around a system of atriums with pedestrian linkages. This maximises natural daylight penetration into, and exterior views out from, the majority of the spaces.

Each “sub-building” is wrapped in a dynamic, 3-dimensional, semi-reflective, white, twin-walled facade. This technology creates natural heating and cooling ventilation by way of thermal currents rising up through the void spaces between the two walls.

It naturally heats each building by trapping warm air between the two walls in the winter, significantly minimising heat losses overnight and “pre-warming” outside air during the day. In the hottest months the entire outer skin opens electronically to fully ventilate the cavity by creating cross convection currents from the cooler southern elevations of the buildings.

The building will have its own rainwater harvesting system to store and supply water to low-flush toilets and irrigation systems, and low-flow sanitary fixtures are specified throughout the development.

The development encourages tenants and visitors to either cycle or walk, with the provision of showers and lockers at car park level and visitor cycle park spaces at Plaza level. A quarter of the car parking spaces in the automated stacker car park are nominated only for small cars. The development is also located very near the proposed Parnell train station and CBD public transport network.