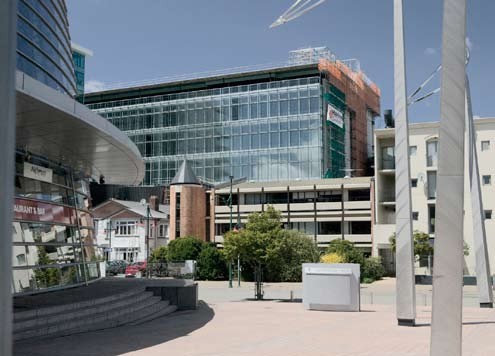 System will enable building to generate its own electricity

A building designed to save $1.3 million in energy annually through its innovative Tri-Generation system, and having 85% of its hot water heated by solar power has received a 6 Green Star – Office Design rating from the New Zealand Green Building Council (NZGBC) — with the highest score ever achieved by a New Zealand office building.

The Christchurch Civic Building, which is nearing completion on Worcester Street, is officially New Zealand’s most sustainable office design. A 6 Green Star rating represents World Leadership, and the project scored a record 83 points in the building rating system.
The Civic Building is a joint venture between Ngai Tahu Property Ltd and the Christchurch City Council. It is a redevelopment and extension of the old Post Office building in Worcester Street, built in the 1970s.

“The centre will deliver significant tangible benefits such as energy and water savings, as well as an improved working environment for increased staff productivity and lower absenteeism through illness.”

It is also New Zealand’s most innovative building, achieving four out of a possible five points for innovation within the Green Star system.
Ms Henley says the building is only the second to achieve a 6 Green Star certification in New Zealand, joining Samson Corporation’s Geyser Building in Parnell, Auckland (featured in the February issue of Building Today).

There are now 35 projects certified under Green Star in New Zealand.
Ms Henley says having two buildings with a 6 Green Star – Office Design rating just three years after Green Star was launched in New Zealand is a credit to the property industry’s commitment to green building principals, and shows the business case is clear.

“There’s a sea change occurring in the way the industry considers how buildings should be designed and built, and what we’re seeing in Christchurch is a prime example.”
The building was designed by Athfield Architects and is being built by Hawkins Construction.
Key sustainable features of the Christchurch Civic Building: • Tri-generation system enabling the building to generate its own electricity from a renewable energy source — biogas — which is piped from the council’s Burwood landfill site (and in future years from the city’s Wastewater Treatment Plant) to be converted into electricity. This process is used to heat and cool the building, with annual energy savings of about $1.3 million.

• Energy-efficient light fittings, automatic daylight dimming, occupancy controls and sensors on the escalators, which will activate only when people approach, and regeneration capabilities on the lifts.

• Double-skin facade is a thermal and solar buffering zone. This facade will also be used to vent air and heat from the building, enhancing its thermal properties. Within the office floors a monitoring system detects when carbon dioxide has reached a certain level and automatically introduces fresh air through floor vents.

• Rainwater harvesting to provide up to one million litres of water annually. It will be used to flush the toilets, for landscape irrigation and a water feature. • Solar power will provide 85% of the building’s hot water. • The reuse of an old building rather than building from scratch represented an embodied energy saving of 65,700 gigajoules — equivalent to a saving of 6440 tonnes of CO2 emissions or 12,800 return flights from Christchurch to Auckland

The target for waste recycling from the building was 70%. In January 2010, the project was achieving 88% recycling for demolition and construction materials, achieved by contractors Hawkins Construction.