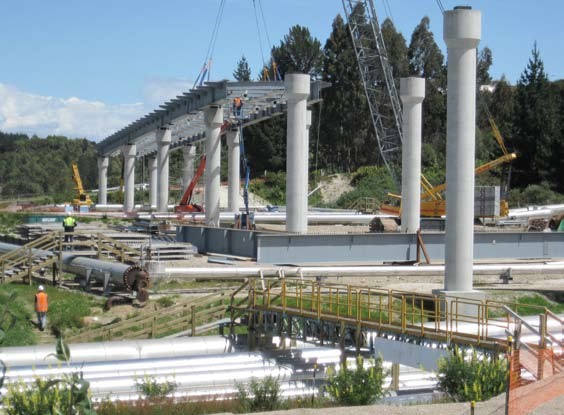 It’s a true engineering feat: a 650 tonne steel bridge situated right over the Wairakei geothermal fields. Due for completion ahead of schedule later this year, this 440m flyover bridge is part of the East Taupo Arterial project — the construction of the 16km highway which runs along the eastern outskirts of Taupo from Wairakei to Taupo Airport.

There are two achievements of scale that make this an impressive project. Not only is the Contact Energy Bridge the longest steel ladder deck bridge in New Zealand, it also involved the largest application of aluminium coating in a single steel structure in Australasia. Around 10,000 sq m of applied 220m aluminium metal spray protects the bridge from corrosion from the sulphur-laden geothermal gas emissions below.

A massive earth fill over the steam pipes was considered at first. But when durable, lightweight flexible steel can be protected against even ferocious corrosive activity, no other option stacked up better than a steel ladder bridge. Alastair Blackler from Fulton Hogan elaborated. “Steel was used for the bridge superstructure as it offered superior span lengths and lighter loads on the bridge’s spread footing foundations,” he says.

“This was important in maximising the clearance between the bridge and Contact Energy’s steam pipes and other infrastructure. “Because the ladder girder-style bridge is a simple pre-assembled form, it is easy to construct. It significantly reduced the number of heavy lifts (up to 70 tonnes) to 14, or one per span. Constructing an alternative pre-stressed concrete Super Tee or Double Hollow Core Bridge would have required multiple heavy lifts for each span.”

Mr Blackler also remarked on the importance of the high quality of the fabrication from Eastbridge. “It helped us to exceed our programme targets during the on-site assembly and erection.” According to Bruce Mellsop of Eastbridge, there were scale challenges in terms of tight production schedules. Only steel could deliver in the time frame, but it required meticulous planning to keep on target.

“With 650 tonnes of pre-assembled steel, and with girders 28 metres long, delivery had to be made in a particular order so the builders could put it up with ease progressively.” In the end, this vast bridge was put up so quickly it was literally amazing. The pier structure of ladder bridges is designed to be simple and efficient, and the high strength-to-weight ratio of steel was an important factor in easy handling and speed.

As Mr Mellsop pointed out: “Each span from pier to pier was bolted together on the ground, then craned into place in a matter of hours. This meant the construction team could assemble and place a span each week.” From an aesthetic point of view, few will see how remarkable the structure is from ground up. When all is complete, when you drive straight over State Highway One and come down to the Taupo-Rotorua intersection, now you will be instantly on a bridge over the Waikato River for 500 metres.

“The public will barely perceive they are on a bridge.” Mr Mellsop says. This steel bridge construction project is a significant one for the industry as it shows what can be achieved with today’s modern steel fabrication technology, combined with technically-advanced protective coatings.

To meet the specifications of the New Zealand Transport Agency, the life span of the coating had to be 35 years to first maintenance. Aluminium matched that life span, with an expectation of lasting more than 40 years before touch-ups will be required. Craig Ross of Napier Sandblasting explained some of the challenges of the biggest spray job in Australasia. “The coating system in itself is not complicated to apply, but the scale of the job and the fact that aluminium can sometimes make equipment temperamental, meant a lot of late nights.”

New Zealand historical thinking about road bridge construction was totally avoided in the choice of steel for the superstructure of this project. New Zealand has been slow to follow the rising international trend. Instead, kiwi ingenuity was applied at all levels. As a result, steel ladder deck bridges may become as popular as they are globally as modern, urban, simple and architecturally-striking solutions.