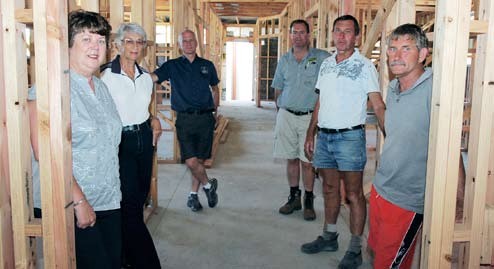 It is almost two years since the Gisborne Registered Master Builders Association decided it needed a project that would help lift its members’ profiles in the community. A number of options were considered, including building a spec house and using the sale proceeds for charitable purposes. The high cost of sections at the time, followed by signs of an imminent recession, caused the Association to put the idea to one side.

Despite this setback, the desire to help the community in some way, whilst raising awareness of the Association and its members, was still a high priority. Gisborne RMBA president and member of the Tairawhiti District Health (TDH) Hospital Advisory Committee, Kath Kitchen, learned of the hospital’s desire to erect a building to be used as a “one-stop shop” for Tairawhiti residents with chronic, long-term illnesses such as diabetes and heart disease.

Due to insufficient funding, TDH decided, reluctantly, that it could not proceed. It occurred to Ms Kitchen this could be something that would fit the Association’s goals and, after many months of consultation and collaboration, the two organisations are currently working together to build the Tui Te Ora Community Health Centre. With an area of 336 sq m, the building has an estimated value of around $940,000.

A management committee comprising Association members and a supplier representative was formed to oversee the building process. An electrical contractor representing ECANZ subsequently joined the committee after finding his initial involvement both challenging and stimulating!

The project management role is shared between Francis Yates, well known to many as a past president of the RMBF, and Peter Stevens of D Stevens Ltd. With the benefit of weekly meetings, the committee is able to keep tabs on progress and to ensure supplies and labour are on site as and when required. Initial funding was provided by TDH, with the Association accepting responsibility for funding the not inconsiderable balance.

Due to the generosity of a number of local and regional charitable trusts, a significant portion of the required funding has been found. The management committee is continuing its search to find the balance. The overwhelming response from Gisborne tradespeople has ensured that labour costs have been kept to a minimum. To date, local blocklayers, plumbers and electricians have joined with Association members in donating their labour to the cause, while plasterers, painters and joiners have indicated their intention to follow suit.

Peripheral services such as legal advice, surveying, earthmoving, roadworks, hireage and craneage have been donated by local companies, while local and national suppliers have also demonstrated extreme generosity in the provision of materials for the Tui Te Ora build. A number of service clubs, with older members unable to manage heavy building work, have contributed by covering the cost of specific items or by undertaking to provide BBQs for site workers. Consolidating goodwill Aside from the obvious benefits of raising awareness of the Association and its members, much has been gained by way of consolidating goodwill within the local building community. As Mr Yates explained, building is an extremely competitive game, so it is rare to visit another builder’s site. “This project has given us (the local tradesmen) the opportunity to work together, and that’s unique.”

Individuals working in the sub-trades have experienced similar satisfaction, with one blocklayer declaring that he had thoroughly enjoyed working with “the opposition”, and asking “when can we do this again?”

The charity build has also had an unexpected and beneficial spin-off effect, providing valuable work experience for students from Gisborne Boys High School and Tairawhiti Polytechnic who were involved in the initial stages of the project. Other students from Gisborne Developments Inc – Trades Training Centre are shortly to play their part by painting the pipes for the sprinkler system.

The project is currently running to schedule, and the expectation is that the building will be ready for handover on 2 July 2010. The Tui Te Ora Community Health Centre will house a range of expert health professionals, including specialist doctors, psychologists, clinical nurse specialists, dieticians, podiatrists and a retinal screening service.

With more than 2300 diabetes patients at present, and an expectation that this will increase to nearly 4000 by 2011, this purpose-built building should prove to be a godsend for the residents of Tairawhiti. Welcoming accessible hub Clinical nurse specialist Natasha Ashworth, who is managing the project for TDH, expects Tui Te Ora to provide a welcoming, accessible hub for those suffering the debilitating effects of chronic illnesses.

All in all, Tui Te Ora (which translates to Weaving Together Wellness) has, quite literally, woven the whole community together in the most extraordinary and heart-warming manner. While the project has created much extra work for Gisborne RMBA members, they will be more than compensated with the handover of a quality building — one which will meet a real need within the Tairawhiti region.