Home Apprenticeships Young builders up for the challenge 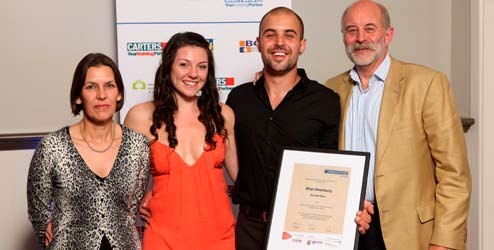 “The challenges in the building industry are exciting,” says winner of the 2010 Registered Master Builders Apprentice of the Year, in association with Carters, Isaac Alder (24) of Nelson’s Bruce Design and Build. Isaac is aware of the dramatic pick-up ahead.

“This gives us a chance to push the boundaries and step outside of our comfort zone. The Christchurch rebuild and the leaky homes work will create more demand, but with that demand comes more competition and, therefore, a higher quality,” Isaac says.  Rhys Doesburg (25), of Wairarapa’s Holmes Construction, who came second in the Apprentice of the Year competition, has a real passion for quality, and hopes that Christchurch’s rebuild isn’t rushed.

“The rebuild is exciting. Obviously, it is a tragedy, but this is an exciting opportunity to do something different,” Rhys says. “I am a strong advocate for keeping the bar high. While the industry will need more people, it is important that the doors aren’t opened up for just anybody. Quality standards need to be regulated and there needs to be processes in place to stop tradespeople from doing work that they’re not qualified for.”

With the high demand and immense level of opportunities, Holmes Construction is looking to branch out to Christchurch. “I think it’s going to take a decade or more to rebuild the city, and we really want to be involved in that. We see a market that needs support, and we want to be there.” Early indications from the BCITO suggest New Zealand needs more than double the number of workers currently in the construction industry to sustain the demand of the medium term, and Rhys encourages young people to think strongly about joining the industry.

“We all need a home to live in, and being able to work on your own home is such a valuable skill. Building is great — it’s so diverse, every day is different. Plus, it teaches discipline and there are plenty of rewards to be gained,” Rhys says.  However, he believes the responsibility is with employers to attract more skilled young people.

“Employers need to make the industry more attractive. Getting rid of the ‘boy’ stigma would be a good start. Young guys want respect too, and when they come into work and get handed a broom every day, it’s not appealing. “Give them something to do that makes them feel worthwhile and they’ll stick around and work hard,” he says.

Apprentice of the Year has proved a valuable incentive for young builders, but Rhys thinks more apprentices need to be made aware of the opportunity and encouraged to take part. “When I first heard about the Apprentice of the Year, I saw it as something that was unattainable. I was confident as an apprentice, but I didn’t receive much support from my workplace or my colleagues to enter, because they weren’t quite aware of how the competition worked,” he says.

It wasn’t until Rhys’ training advisor at the BCITO, Heath McKenzie, told him that he had the potential to succeed in the competition that he decided he would give it a go. “All the ability in the world is nothing without direction. Employers really need to push this competition, because it reflects on the company as well as the apprentice. As I move up the ranks at Holmes Construction I will be encouraging apprentices to enter. The competition gave me a lot of confidence and it opened a lot of doors for me.”

Rhys is starting a cadetship in June, working on a Diploma in Quantity Surveying. “I will be Holmes Construction’s first cadet, so it’s really exciting. It is definitely a flow-on effect from my success with Apprentice of the Year,” he says.  Isaac also promotes the industry and supports young people to take up building. “Building is becoming more and more recognised as a skilled profession, not just something people do because they have no other options,” he says.

Entries for Apprentice of the Year are open until June 30, 2011. For further information, or to download an entry form, go to www.masterbuilder.org.nz, www.carters.co.nz orwww.bcito.org.nz.

Entry forms can also be collected from Carters stores nationwide. Apprentices, employers and those young people aspiring to be a part of the construction industry are encouraged to join up to the Facebook page by searching RMB Carters Apprentice of the Year at www.facebook.com.