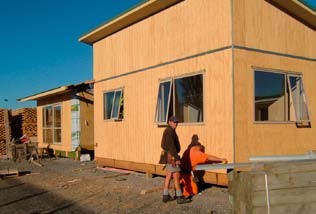 It is the eleventh home Habitat for Humanity Central North Island (CNI) has built for a Hawke’s Bay family, and it is taking Habitat one step closer to reaching its ultimate goal — eliminating sub-standard housing in New Zealand. The project recently reached a major milestone after its start in early August — the house was closed in with all windows and doors in place.

The building is specifically designed so it can be craned over the prison’s fence in two pieces on November 8, after which the pieces will be transported to their final site in St Leonards, Hastings. Habitat for Humanity has acquired the section in St Leonards under the Government’s Gateway scheme which gives housing providers, such as Habitat for Humanity, access to land on a deferred settlement basis.

Following the house being transferred to its permanent site, a team of local volunteers will join the two parts together and finish the house inside and out, including landscaping and fencing. The Hungahunga-Repia family will move into their home in early December.

“This Habitat build supports the community in more ways than one,” Habitat CNI general manager Nic Greene says. “It allows prisoners to give something back to the community by building a home for a local family in housing need, benefiting the local family and their community. “At the same time, the project gives the prisoners, who are studying for a national certificate, an opportunity to get practical experience. This improves their chances of stable employment after being released,” he says.

The Hungahunga-Repia family is very excited about moving into their Habitat home. The family consists of mum Sharne, a qualified chef, dad David who works at a yard maintenance company, and their three children aged 16, 4 and 2.

The family has not yet seen their new home, and can’t wait to get a chance to visit the prison and see the progress. They are currently helping out in the Hastings ReStore, the local fundraising arm of Habitat for Humanity CNI, and will also be working on their home after the house has been moved to its permanent site.