Home Latest News The Forsyth Barr Stadium — by the fabricators 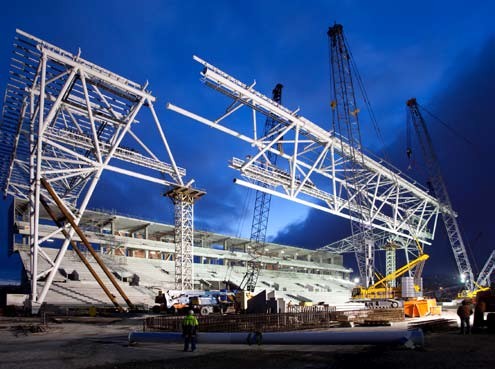 It was fitting that one, Christchurch-based Pegasus Engineering, represented the South Island, while Auckland-based Grayson Engineering kept honours even for the North Island. The kick-off of the Rugby World Cup set the initial deadline for a contract period at 25 months, but this had to be shortened to 18 months to allow the playing surface grass to be grown in time.

Bear in mind that the stadium roof was to be fully covered with EFTE (ethylene tetrafluoroethylene). While this material has the unique property of being transparent to ultra-violet light, Dunedin is located at 42° south!

Main contractor Hawkins Construction invested in a full 3-D time-programmed model that enabled its team to sequence all the building components on screen. The steelwork was very much on the critical path.

Meanwhile, Pegasus was subcontracted to do the North, East and West Stands, all the stair structures and lift shafts, and would add five prismatic and four planar trusses to the South Stand roof.

In the end, Pegasus contributed 1827 tonnes of steel to the project and Grayson 2060 tonnes. All the shop drawings for the project were prepared by Grayson’s subsidiary Cadtec Draughting — 8578 Strucad drawings for 20,642 members.

The 3-D modelling technology was critical to the success of the project as the erection methodology meant that pre-cambers had to be allowed for in the fabrication. The two external arch trusses of the five had the added complexity of “twists” that were incorporated to compensate for the eccentric loadings of the facades that hung off them. Since all of the roof steel consisted of Circular Hollow Sections, both Grayson and Pegasus had imported high-tech CNC (Computer Numeric Control) pipe profiling equipment.

In addition to the time this saved in profiling, the accuracy of the fit-up meant there were considerable savings to be made in weld time and the cost of consumables. The sheer size of the steel members and the need for total accuracy in conforming to the demanding geometry compelled Grayson and Pegasus to invest in more workshop space. Grayson simply added another bay to its new plant in Wiri, South Auckland, while Pegasus rented another factory.

The dimensions and heavy weight of the steel they were fabricating made test assemblies imperative to prove that it would all go together on site without any hitches. All splice points were meticulously pre-planned. Once they were satisfied, the two fabricators would dismantle the large steel assemblies into smaller units and paint them in preparation for shipping to Dunedin.

Here Pegasus had the advantage of its closer proximity to Dunedin, making 128 round trips — a total of 90,880 kilometres. Grayson sent 124 truck loads from Auckland — most of these being over-dimensional, with the heaviest weighing 30 tonnes plus. The first route was Auckland to Wellington by road, Wellington to Lyttelton by sea, and then by road to Dunedin. However, when shipping to Lyttelton was cancelled, the sea-crossing terminated at Picton, thus increasing the distance of the road journey. Each Grayson delivery was a four-day round trip.

“There were several advantages in following this methodology,” Pegasus Engineering managing director Gavin Lawry says. “It virtually eliminated on-site welding and, thus, saved time on the construction programme. It was also good practice in terms of safety. Very importantly, it enabled both fabricators to draw up ITPs (Inspection Test Plans) that intensified Quality Assurance and Quality Control activity.

“Every plate required for bolted flange connections was subjected to a three-stage non-destructive testing, specifically to detect steel delaminations. Ultrasonic testing was then carried out by qualified third party inspectors.”

All told, approximately 71,000 bolts were used on this project. The bolts for the flange connections were Grade 10.9 manufactured to a JIS B 1186 specification, and then tested in Australia to determine the tensioning procedure to be adopted. Each flange connection was bolted up by two experienced erectors, closely watched by a supervisor who ensured the correct torque values were applied.

In phase three, the bolts were tightened to the full required torque value. The last stage was to then loosen each bolt off and retighten back to the full required torque value. A 20-bolt connection took about two hours to complete. By following this procedure, the erection team ensured that no stresses or fractures had occurred in the final bolt assembly. As much work as possible was assembled on the ground into large modules, which were then lifted into place with large cranes.

Grayson Engineering commercial manager Colin Berger describes the erection of the primary truss: “At 140m in length, and supported by legs at each end, it weighed 701 tonnes. It was assembled on the ground as three truss sections. First, the legs were raised and supported by temporary props. The two end truss sections were then attached to the tops of the legs and also supported until the long middle section could be lifted and secured. “Weighing 390 tonnes, this was the heaviest lift of the entire project. One end was picked up by a 400-tonne crawler crane, while the other end was attended to by two 280-tonne crawlers. “The three cranes, provided and operated by Daniel Smith Industries, were each working close to their capacity as they walked the section into position and completed the lift,” Mr Moore says.

From the South Stand primary truss to the North Stand opposite is a distance of 105m, as the gull flies. That’s the length of the five roof arch trusses that span the pitch below. Once again the 400-tonne crawler crane of Daniel Smith Industries was in action, walking each truss into position before lifting to an internal clearance height of 37m. A concrete box drainage culvert constructed in 1930 presented an underground obstacle. The crane circumvented this simply by setting down the 200-tonne truss, crossing the culvert and picking up its load on the other side.

Neither Grayson Engineering nor Pegasus Engineering lost time because of injury or accident. It would be appropriate to acknowledge the teamwork and contributions made by all the other subcontractors, from those who drove the 550 piles to the engineers who defined the seismic differences between the stands and the roof, while minimising any shadowing of the grass growing on the stadium floor.

But their names are legion and have been carried in hundreds of other articles. However, one company deserves to be honoured because more than all the rest, it bore the full weight of responsibility. That’s how it was for Hawkins Construction, the main contractor, whose project director Andrew Holmes endorsed Shakespeare’s words: “Uneasy lies the head that wears a crown.” If it wasn’t 10,000 cubic metres of crushed building concrete to be re-used in haul roads and hard stands, it was the steel supply chain and the need to hit those lift dates.

“Our mantra was ‘Plan, plan, and plan again: then check, check, check again and sign off’!” Mr Holmes says. “We had to win by reducing our collective risk, which is like the spiritual opposite of the sport and performances that will take place here in the future. Yet for those who built this wonderful stadium, it was no less emotional.”