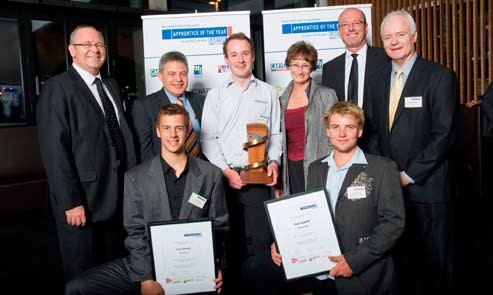 Second place was awarded to Matt Saathof, 21, of Hastings who is employed by Gemco Construction in Havelock North. Twenty-year-old Tom Storey, employed by Simon Linton Construction Ltd in Ohope, took out third place.

Winner Ryan Keogh said after winning the award that he was “absolutely overwhelmed”. “It’s an absolute honour to be involved in this competition, and to be the winner, it blows my mind,” he says. Ryan is excited about the future and looking forward to furthering his study and his career. “I’ll complete my Diploma in Construction Management, and then I’d like to further myself on site. I’ve got half a dozen tradespeople under me at the moment. I want to grab the bull by the horns and make the most of the opportunities that are available,” he says.

Ryan’s employer, Ewan Oats at Naylor Love Construction Ltd in Dunedin, says he’s been training apprentices for years, and having Ryan win the competition is a highlight. “Ryan is an exceptional apprentice. He has a can-do attitude and he wants to achieve in all aspects of his work and education,” Mr Oats says. “We’ve offered him a scholarship and he’s taken that on board, putting him through programmes at Otago Polytechnic. “I’m quick to acknowledge Ryan’s achievements, but every one of those other young men who have entered the competition deserves a word of accolade as well. I say good luck to all of them,” he says.

The competition judges said Ryan, who is trained by the Building and Construction Industry Training Organisation, performed consistently across the competition. “He’s going to be an asset to the industry because he is passionate about building and he has a desire to succeed,” judges said. “Ryan is strong in his health and safety knowledge, and his workmanship is very good. Ryan said he would rather take his time and get things right, and that showed through in his performance in the practical component,” they said.

“We were looking for someone who excelled in all areas of building, and we found that in Ryan. We’re very pleased to award him the top honours in this year’s competition. “All in all, these 10 guys are the best of the best. The Apprentice of the Year is a great competition to be involved in.” RMBF chief executive Warwick Quinn says training and retaining people in the construction industry is more important now than ever. “Initiatives like the Apprentice of the Year are integral to showcasing our industry and providing a real and tangible career path in one of New Zealand’s largest sectors,” Mr Quinn says.

“The entrants in the Apprentice of the Year competition are exactly the type of bright young people New Zealand needs, and it’s important for the construction industry to encourage and support them.” The Apprentice of the Year competition is owned and managed by the Registered Master Builders Federation (RMBF), sponsored by Carters, partnered by the Building and Construction Industry Training Organisation, and supported by the Department of Building and Housing.

Apprentices, employers and those young people aspiring to be part of the construction industry are encouraged to join up to the Apprentice of the Year Facebook page:www.facebook.com/apprenticeoftheyear.