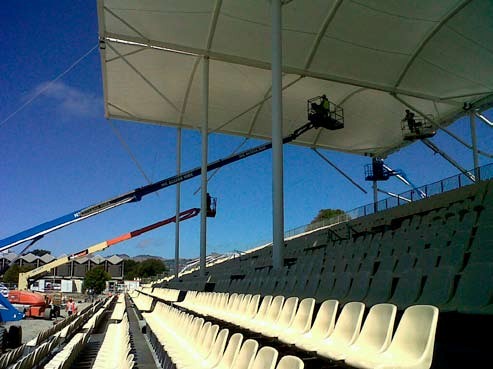 As the Super Rugby season approached, Cantabrians and especially Christchurch folk needed the equivalent of a fast break to counter the quake damage done to AMI Stadium.
In July 2011, the CRFU commissioned a feasibility study on a generic site. In the following two months concept designs were drawn up for various site options.

How does this rate as a fast break? Populous Architects associate principal Daryl Maguire says in about 130 days a temporary stadium with a capacity of 18,000, including 11,000 covered seats and 555 in corporate boxes, was constructed.
“The master plan expands the capacity to 25,000 seats for big events such as test matches, and for music concerts the stadium will hold 35,000 people,” Mr Maguire says.
“What’s even more important is that safety is paramount. After all the quakes and aftershocks, and the anxiety that springs from deep sadness, people need a level of comfort when occupying large public structures.
“That acknowledged, the design for safety has not compromised the functional and architectural elements of the stadium. The lightweight fabric roof dispels all spectator perception that a heavy weight is hanging over them.”

Even before erection could start, the ground conditions proved to be worse than anticipated. Extensive earthworks improvements and stabilisation measures were undertaken to satisfy the engineering seismic design criteria determined by CPG New Zealand Ltd.
Above ground, Andrew Rowe of Australian firm Wade’s Engineering, was responsible for the steel structure design. On the North Stand, with the corporate boxes at a height of 12m, designing for earthquake loads was essential, and some 170 tonnes of steel were used.
On the South Stand, which has no boxes, it was necessary to design only for variable wind loads, and 120 tonnes of steel were used.

The membrane roof was supplied by Serge Ferrari, the world’s leading manufacturer of PVC membranes. Project manager Adrian Bosch of Fabric Structure Systems says it’s the same kind of material the company used for The Cloud on Queens Wharf in Auckland.
“It weighs only 900 grams per square metre, is translucent, non-flammable and much stronger than glass,” Mr Bosch says.
“It’s also quick to erect. Each roof panel has dimensions of 12.4m wide by 21.7m long, and we attach the ‘skin’ on the ground by bolting an aluminium extrusion edge to the steelwork.
“We finish with gutters and accessories before hoisting to its roof height. We designed the roofing panels to cover the seating stands, all surplus seating having been removed from Eden Park following the Rugby World Cup.”

Whatever was needed to accelerate the construction programme was readily adopted. The lighting towers were salvaged from Carisbrook Stadium, connecting Dunedin’s House of Pain history with Christchurch’s new Addington venue.
And for Crusader fans, who will relish the notion that their team will still be playing on its own turf, as it were, the grass of the AMI Stadium pitch was carefully rolled up and transplanted to Jack Hinton Drive.

Project manager Matt Allen says his company, RCP, was commissioned by the Stadium Trust to provide high level planning and professional project management.
“With such a tight deadline, the project needed to get underway straightaway,” Mr Allen says, “and that meant design overlapped procurement and construction.
“Scoping the project at this stage was a challenge when all we had to work from was a preliminary pricing budget. Yet in just one and a half weeks we had launched procurement and made a start, thanks to the immediate buy-in from all the parties involved.
“A few Christmas holidays were put on hold because we needed it to be a miraculous programme. The infectious mood was all about the good of the cause. Suppliers gave us sharp prices — some even gifted resources and time to help.
“And, of course, we had to keep Health & Safety uppermost in everyone’s mind. It was a time to hasten carefully, because just one incident could jeopardise the target date.
“RCP, through Hawkins Construction as the main contractor, actively managed on site the critical elements that brought the stadium together.”

Hawkins site manager Shawn Cunningham says Hawkins hit the road running with this project, starting their countdown to the deadline right from day one.
“No amount of rain was allowed to slow us down — only strong wind did that — and we made up for that during the calm periods,” Mr Cunningham says.
“Our approach was to keep ourselves open to what was good for the project, agree readily and act quickly. It helped to have worked before with the lead steel constructor, Pegasus

Engineering Ltd, on the Forsyth Barr Stadium in Dunedin.
“Realising that speed and timing were of the essence, Pegasus went to the local steel fabrication market and subcontracted Chapman Engineering, John Jones Steel, and other South Island companies such as Southern Cross and Taymac.
“From the North Island, Pegasus also subcontracted Grayson Engineering and Stevensons Structural Engineering to assist. All the erection of the structure was done by Pegasus

Engineering’s team of riggers. When they were scheduled to work at height, there’d be a safety briefing at the start of each day.”
Pegasus Engineering construction manager Jim Hands says they had the initial kick-off meeting at the Hawkins Construction offices in Christchurch on January 13, when all subcontractors and trades were briefed as to the scope of their work.
“The original plan was to tackle the North Stand first,” Mr Hands says.
“However, working closely with Fabric Structure Systems, we identified possible design points that risked delaying the production of drawings.
“Pegasus advocated that our earliest start on site should be made instead at the South Stand. When all parties agreed, Pegasus allocated four detailers to make an immediate impact on producing our workshop drawings.

“The two stands look the same, each having a gantry structure comprised mainly of Circular Hollow Sections ranging in diameter from 323mm down to 168mm, with a 9.5mm wall thickness.
“However, the steelwork in the North Stand is approximately 90 tonnes heavier, thanks to the additional structure supporting the VIP boxes and the ablution blocks.
“Cellular beams, originally installed at Eden Park for Rugby World Cup events, were removed, together with the temporary seating. Pegasus lengthened and stiffened the beams with full penetration butt-welds.

“Each stand has a structure supporting 10 individually-framed roof panels made from 250 x 250 x 9mm Square Hollow Sections, welded together with three Circular Hollow Section curved steel pipes. Each assembled panel consisted of 52 pieces.
“While the fully fitted VIP boxes were being installed, the roof panels were fitted on the ground with their PVC skin. Next door, Addington Raceway generously provided space for this work to be done.

“At 7.5 tonnes, the weight of each panel was not a problem when it came to the lift. However, wind made it hard to find four-hour windows for each panel to be hoisted and bolted into place. There were lots of 3am starts to beat the afternoon gusts that threatened to turn the panels into kites!”

Pegasus Engineering managing director Gavin Lawry says the good working relationships that Hawkins Construction and Pegasus had developed in the Forsyth Barr Stadium project were a key factor in meeting the construction deadline.
“A second key factor was our early collaboration on the design phase,” Mr Lawry says.
“This enabled us to assist with decisions on the types of connections, member sizes and loads, and weld details.
“I’d also like to pay tribute to the prevailing can-do spirit of co-operation that all the players brought to the party, from Populous as the architects and RCP as the project panagers, to Fabric

Structure Systems and all my fellow subcontractors and members of Steel Construction New Zealand.
“Together we were winners even before the first match was played!” Mr Lawry says.

• There were 1224 individual fabricated assemblies in the contract, including two stairs.

• To cope with the transport logistics, Pegasus hired additional vehicles, trailers and drivers

• The cost for constructing the temporary stadium is being funded by financial contributions from the Government and the Christchurch City Council, and will be supported by hire fees from sporting codes keen to use the venue, such as the Canterbury Rugby Union and the New Zealand Rugby Union.

• The stadium is also being built on land offered to the city by the Christchurch City Council.

• The Ministry of Economic Development issued a media release on February 10, 2012, stating that a West Stand is to be added so that the stadium will accommodate up to 25,000 fans for the rugby test against Ireland in June.

• For the longer term legacy, the roof is designed to remain in place, along with the sports lights and the professional grade pitch.

• The stands can be replaced with more permanent infrastructure.