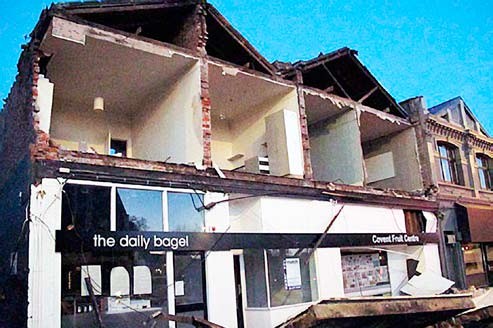 Prior to the earthquakes of 2010 and 2011, Christchurch developer Richard Diver had been making plans for the Carlton Butchery building.
He engaged Modern Architecture Partners Ltd (MAP) to work on a design that was in keeping with the historical style of the building, intending to retain the existing structure.

Before these plans could be implemented, the September quake of 2010 struck, and the facade of the Daily Bagel and the Covent Fruit Centre fell away, leaving the old Carlton Butchery building unstable and dangerous.
Mr Diver made immediate arrangements for the rubble in the street to be cleared and the building demolished.

The Christchurch Civic Trust, which had emerged as an action group of residents dedicated to the preservation of significant heritage buildings, was very supportive of what he had been proposing.

So when he determined that the Carlton Butchery would not be lost forever and forgotten, the Trust was delighted. Some re-design was undertaken, and construction was already underway when the second quake hit in February 2011. The building completed thus far withstood the quake, and construction continued.

MAP associate Andy Watson says the city’s Civic Trust has another string to its bow in addition to preserving heritage buildings
“It’s the encouragement of quality design in the future development of Christchurch, because what we build today will be our heritage tomorrow. Significantly, the new building was to be one of the city’s first to re-assert itself with a strong steel-structured component,” Mr Watson says.

A steel frame structure was proposed early in the concept stage, and provided a number of significant advantages, including:
• smaller sized columns resulting in more open plan space and rentable area than would have been possible with reinforced concrete,
• less weight in the floors resulting in reduced lateral earthquake loads, as well as reduced loads on the foundations, and
• the high-speed erection of the steel, frames and floors reduced the overall construction time and kept the programme economical.

Brett Gilmore, Director and Senior Structural Engineer with Structex Metro Ltd, describes the building’s main earthquake lateral resisting system.
“Steel moment-resisting frames comprised of 350 welded column section provide the main lateral resisting system in the north-south transverse direction,” Mr Gilmore says.
“These are supplemented by the pre-cast concrete frame to the front elevation of the building and an interior concrete shear-wall at ground level. The frames are designed as nominally ductile (µ = 1.25), and sized to limit the lateral drifts to the adjacent boundaries to less than 75mm.

“The steel moment-resisting frames, in combination with a composite concrete metal-deck flooring system, have proved themselves by performing extremely well through the recent earthquakes, as Steel Construction New Zealand Inc and others have reported.
“Both the steel and the concrete columns and walls are supported on shallow foundation beams and steel screw piles that extend to a depth of 8m to 9m, and bear into very firm gravels.

“The suspended floors are comprised of composite concrete metal deck (ComFlor 80), supported on partial composite steel beams. The beams were installed unpropped for fast, economical erection, and are supported on the lateral resisting steel and concrete frames.
“The remainder of the gravity system consists of a light, steel-framed roof, with metal cladding over steel purlins supported on steel rafters.”

Many of the steel-frame structural elements and some of the pre-cast concrete elements have been left expressed in the finished building to form a significant part of the overall architectural aesthetic.
The main superstructure has already endured several sizeable earthquakes with no damage observed. The piled foundations into firm gravels also provide the best mitigation against possible differential settlements that may occur with liquefaction.

Another feature of the building includes a swimming pool installed on the second floor as a single, pre-cast concrete element.
The design anticipates mixed uses, with hospitality on the ground floor, offices on the first and, eventually, apartments on the second and third floors, which are initially to be used as offices.

“The size dictated that we use custom-made welded columns and beams, all fabricated in New Zealand. The floor decks were shear-studded on site, welding through the decking to the steel beams to get full composite action from the floor diaphragm,” Mr Anderson says.
“Not only does this system perform well during seismic acceleration, but it is also fast and efficient to build. The attributes of ComFlor 80 make propping unnecessary, and there is no need for additional formwork because the floor decks are provided with a steel edge.

“All that’s required is to lay the reinforcing mat and pour — a quick and cost-effective building solution.”
This is not the only project being driven by Mr Diver in Victoria Street and other Christchurch locations, but it is probably closest to his heart.
“I was born and bred in the city,” he says, “and after the loss of lives and the devastation, I just want to get good buildings up and running as fast as I can.
“No, we’re not London, and this is the Carlton Butchery, not the ‘Gherkin’, so we don’t have unlimited finance and we do have height restraints and fire-rating considerations.

“Critics who complain about concrete walls and bemoan what they perceive to be a lack of character and aesthetics should visualise the future setting of our new buildings.
“I believe that when they are seen in their complete context, they will answer the nay-sayers. Meanwhile, there is the sheer economics of launching the rebuild enterprise, and here I’m very aware of the people who need work and incomes — the human capital that we risk losing if all we do is carp.
“We’ve got good architects and engineers, and good skills among our building trades. Christchurch needs them put to good use!”