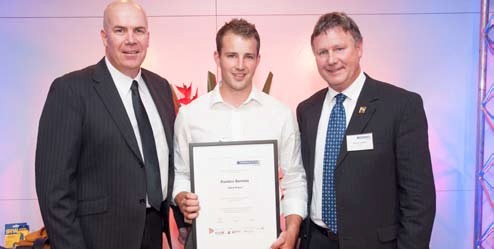 The 24 year-old carpentry apprentice decided to give Apprentice of the Year a go after a chat with his BCITO training advisor, and he’s delighted he did. Ben hopes all apprentices will take advantage of the opportunity. “The pressure I was put under as part of Apprentice of the Year was a great learning curve for me. Being scrutinised on what I learnt during my apprenticeship, as well as building my portfolio and presence, was very testing. It’s great to know I could withstand that pressure,” he says. “I would encourage any apprentice to get involved in Apprentice of the Year. It’s an invaluable experience if you’re willing to really go for it — you’ll gain as much as you put in, which is so rewarding.”

Ben was originally inspired to get into the construction industry and undertake an apprenticeship after travelling around Europe and appreciating different architecture. Always keen to be challenged, it was this mentality which saw him go so far in the competition.

Ben was extremely grateful for the $2000 grant for tools he won as part of his prize package, and the opportunity to attend the Registered Master Builders PlaceMakers 2012 House of the Year event. “Attending the House of the Year event definitely made me want to get involved — it looks like a fantastic experience. It’s definitely something to aim for! “One day I’d love to own my own business, so I’ve got a lot of skills to develop as I work towards that goal. I’d like to develop and harness skills as a foreman and a builder running sites, and I’d like to develop management and business skills too.”

Ben is also supportive of the Government’s recently announced incentive for apprentices, an investment of up to $2000 for each new apprentice and their employer. “I’m definitely in favour. It’s a great kick-start for young people to get involved in the building industry — a great opportunity. It’s also an incentive for employees to take apprentices on. As long as job opportunities are available, that can only be a good thing.”

Apprentices, employers and those young people aspiring to be a part of the construction industry are encouraged to join up to the Facebook page at www.facebook.com/apprenticeoftheyear.