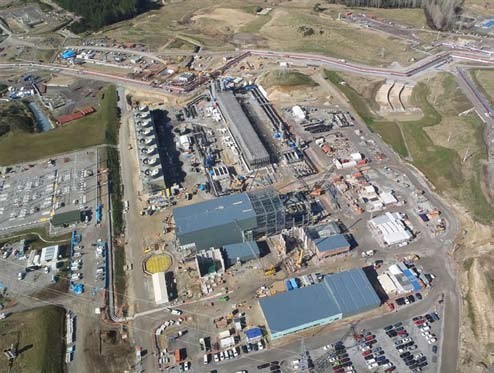 The Te Mihi project is a programme of investments focused on expanding the use of the Wairakei steamfield and reducing the environmental impact from Contact Energy’s Wairakei operations.

Contact is investing around $750 million into the construction of a power station; development of the steamfield so that separated geothermal water can be re-injected; a bioreactor project to remove hydrogen sulphide from cooling water before it is discharged to the river; life extension work at the Wairakei geothermal power station; drilling of production and reinjection wells; and development of people and business systems for managing the new assets in the future.

Nearing completion, the Te Mihi Geothermal Power Project is located on the Wairakei Geothermal Steamfield. The project owner is Contact Energy, which owns and operates the steamfield and the Wairakei Power Station sited 8.5km north of Taupo, on the eastern side of Poihipi Road. McConnell Dowell Constructors Ltd, SNC-Lavalin Power (Pacific) Inc, and PB New Zealand Ltd have entered into a joint venture agreement (hereinafter referred to as MSP JV) to construct the power station, scheduled for completion this year. Power for 100,000 homes It will include two new steam turbine generators of 83 Megawatts each, which will generate enough power for more than 100,000 average homes. Once completed, some of the new generation from the Te Mihi station will replace older parts of the Wairakei Power Station, which will be gradually decommissioned.

“The concrete table and the operating floor are at the same level, affording maintenance access to the turbines and the generators. “The two units of the turbine hall building have an almost identical structural layout and are separated by a 10m-wide drive-through bay. Each unit is deemed to be structurally independent in terms of seismic, wind and gravitational loading. “The 3-D model includes the turbine hall main building frame, the hot well roof and the Non Condensable Gas (NCG) building. The model shows the operating level floor, and below this the mezzanine and ground floors.

“The operating floor consists of predominantly simply supported single span steel beams designed to act compositely with a 200mm-thick concrete slab. “The operating floor is isolated from the turbine table on all sides to ensure that the turbine table structure and the building steel structure act independently of each other. A sliding cover-plate is provided across the gap for safety reasons.

“Floor beams have been designed as non-composite, simple supported single span beams that act as ‘collector beams’ for the longitudinal seismic bracing system. This ensures that the ductile failure mechanism can occur under the Maximum Design Earthquake (MDE) load case. “The mezzanine floor typically consists of simply supported primary beams supported by secondary joists in between the primary beams. Vertical cross-bracing (designed as tension only) has been provided along two gridlines (B and D) under the floor, which acts with the main building bracing system to provide longitudinal stability for the mezzanine floor.

“The main crane runway beams span the portal columns on both sides of the building. They are designed to support a 60T Safe Working Load (SWL) gantry crane which also includes a 15T SWL auxiliary hoist. The crane runway beam is laterally supported by horizontal truss lacing and support beam. “A maintenance access platform is provided at the northern end of the building. Runway beams have also been installed to support a 5T SWL auxiliary gantry crane.”

The Generator Circuit Breaker Rooms (GCBs) are located on the western side of the mezzanine floor and extend to the underside of the operating floor slab above. These rooms are designed to be dustproof, so airlocks are provided. The NCG building design consists of two main platform levels: the mezzanine floor and the operating floors levels. In between these levels, and above the operating floor level, are several platforms providing maintenance access to plant inside the NCG building. The main framing consists of lean-to frames that match the portal frame spacing of the main building.

The turbine hall wall cladding is aluminium for increased durability. The main building design provides for an extension to the southern end of the building to accommodate a future Unit #3 turbine and generator. As the lead fabricator and steel erector, Grayson Engineering was responsible for the structural steel in the main turbine hall, three Power Distribution Centres, and two Non Condensable Gas buildings.

Grayson site co-ordinator lan Emond says the company arrived on site with a team of 10 erectors plus one welder (for remedial work). “We’d been given priority to proceed with the main turbine building and quickly started working seven days a week and 12-hour shifts. Initially some connections proved hard to work with, but we overcame this by having them re-detailed, and were soon handling three deliveries a week from Grayson in Auckland,” Mr Emond says. “In the drive to get plant into the main turbine hall, time pressure naturally tended to make all of the subcontractors a little anxious to start, creating work congestion. MSP JV site management addressed this, and sequencing improved dramatically.

“As far as Grayson Engineering was concerned, it was business as usual in the workshop and business as usual on site. The portal columns had 1200mm webs and weighed 342kgs/m. That necessitated the use of larger access gear and cherry-pickers equipped with sufficient reach. “Our team quite enjoyed fitting the heaviest steel components, the 5.4-tonne knee-joints. Each of these was connected to its column (5-tonnes) and to the rafter (3-tonnes). “The apex of the rafter was 27m above the operating floor. You don’t think about that when you’re proceeding phase by phase. For health and safety reasons, no heavy lifts were undertaken outside daylight hours, so at the start and end of our shifts when working light was provided, we kept ourselves busy with bolt tightening from access platforms.”

MSP Joint Venture construction engineer David Pattinson praised Grayson Engineering for adapting its steel erection schedule to suit the best interests of the overall construction programme. “Time has been of the essence on this fast-track contract, and many trades have overlapped with others. Accommodating follow-on trades has been critical for the overall success of the project and, by showing flexibility, Grayson helped us minimise any potential conflicts,” Mr Pattinson says.