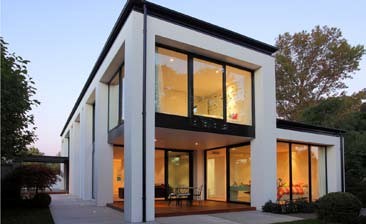 Metzger Builders Ltd was awarded the New Homes $1 million – $2 million category and the PlaceMakers Bathroom Excellence Award, which was particularly rewarding for Mr Metzger after losing a full 10 weeks of work on the house due to the 2011 earthquakes. “This property was hit hard by the February quake — we had to put in a claim to re-level and repair which cost us eight weeks,” Mr Metzger says. “Then the June earthquake happened and we had to put in another claim, costing us a further two weeks. “The February earthquake, in particular, hit at a time that really hindered the process. It was such a challenge, but we got up and over it, and winning was all the more rewarding.”

Metzger Builders Ltd has now picked up four national titles at House of the Year, in 2008 and again in 2009. Mr Metzger believes winning House of the Year awards is recognition for working hard and being particular about details. “We place a lot of emphasis on detail when it comes to our homes. Even with earthquake repair work, we worked to the mentality that there is one standard, regardless of whether we are working on a repair or a new build. I think that attentiveness played a large part in our win,” he says. “You should never assume that because you won the previous year you will win again. We look at the House of the Year competition from the perspective that we should strive to better ourselves each year. Once you’ve reached the standard, the hardest part is staying there.”

House of the Year judges saluted the home as immaculate, calling it “luxury living at its finest”. “This contemporary, four bedroom home is built for the sun, and much thought has gone into how a home needs to work for today’s family. A very smart, elegant home, which is superbly crafted and finished by the building team,” they said.

Mr Metzger believes winning House of the Year titles is fantastic recognition for his brand, and will continue to enter the competition. “Once you start entering House of the Year, and especially if you get a bit of success, it becomes very addictive. We have two entries in the 2013 competition,” he says. “House of the Year is a great experience and a fantastic marketing tool, and if you are willing to put the work in I would encourage anyone to enter. Similarly, if you don’t do well one year you should pick yourself up and try again because it is so rewarding to win.

“It is such a morale boost for staff. My wife Ali and I strongly believe that our business is only as good as the staff we send out on site, and winning this award is something our staff can all revel in. “For us, winning these awards is a team effort — we’re so grateful to our wonderful staff, subtrades, clients and designers for the part they played in our House of the Year awards.”

For more information about the competition, visit the Registered Master Builders web site at www.masterbuilder.org.nz.