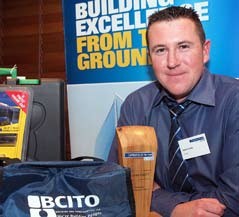 Hawke‘s Bay building apprentice Adam Knott has gone up against 90 applicants from all over the world to secure a role on a high-profile $60 million project with Fletcher South Pacific.

Based in Papua New Guinea for two years, Mr Knott, who is only 14 months out of his building apprenticeship through the BCITO, will be supervising the build of a swimming complex for the 2015 South Pacific Games.

He says while giving up his life in New Zealand is a big step, this job will be invaluable to furthering his career.
“I’ve never been to Papua New Guinea before and I know it can be a dangerous place to live, but when I realised what an incredible experience it would be I had to put that aside and concentrate on the benefits. This kind of opportunity is just too good to pass up,” he says.
“The sheer size and scale of the project is huge. We are building a swimming complex for the 2015 South Pacific Games, including an enclosed arena, changing facilities, a gym and the pools themselves. As a construction supervisor, I’ll be in charge of one of three areas of the building site.”

BCITO chief executive Ruma Karaitiana says Mr Knott’s achievement reflects the high calibre of apprentices training through the BCITO.
“It is extremely heartening to see one of our apprentices doing so well in their career. The success of the BCITO‚‘s training programme is highlighted by Adam being recruited ahead of so many others from around the world,” Mr Karaitiana says “The building and construction industry continues to thrive, and apprentices are high in demand. Adam proves that New Zealand builders are setting the benchmark for quality in the industry. This is a real triumph for him, and we wish him all the best for his time in Papua New Guinea.”

Mr Knott says he has big plans for the future, hoping to get as much experience under his belt as possible before moving into a construction management or project management role.
“I always see myself as coming back to Hawke’s Bay. But for now, I’m just going to take on projects as I can and re-evaluate as I go. At the moment, the world is my oyster!”