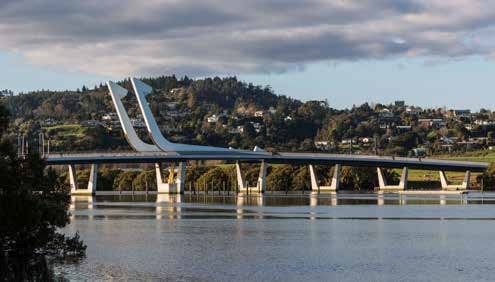 Northland’s Lower Hatea River Crossing is no ordinary bridge — and nor was it ever going to be.

Awarded the 2014 Supreme New Zealand Commercial Project Award in May, the bridge opened in July 2013, and is already garnering plenty of attention.

“The brief from the client, Whangarei District Council, was to create something that would bring people to the city, that would become an icon for the region, both functional and aesthetic,” according to McConnell Dowell engineering manager and project lead Kristian Nelson.

Providing a vital road link between Whangarei’s eastern suburbs and industrial areas on Port Road, the bridge also had to maintain a clearway for marine traffic, thereby recognising the importance of the waterways to the region.

Working with specialist UK bridge architect Knight Architect and local engineer Peters & Cheung to develop the bridge and bascule form that met the brief of acknowledging the cultural history of the region, McConnell Dowell provided assurance for the client that the concept was buildable.

With a form based on the traditional Maori fish hook, hei matua (representing strength, good luck and safe travel over the water), the bridge’s opening mechanism is based on a traditional rolling bascule bridge.

The structural steel deck and beam elements are shaped both to cantilever and to roll back allowing the bridge deck to lift, taking advantage of the inherent structure built into the hook form.

“The rolling bascule idea came up early in the process following a walk the architect took through the viaduct where there’s an old bridge no longer working,” Mr Nelson says.

Community involvement was a priority for the client, and the project team — which included Transfield Services — met with local Iwi and community to talk about the area and its rich cultural history.

More than 60% of the project’s value was spent locally with Whangarei businesses subcontracted to deliver elements of the construction process, with an estimated $17 million injected into the region’s economy.

The 265m-long bridge consists of five composite steel and concrete spans on either side of the channel, and a 25m bascule span rolled open by hydraulic rams in the centre.

Counterweights in the hook tips of the bascule element use gravity to reduce the energy needed to raise and lower the bridge.

The Lower Hatea River Crossing is one of a small number of rolling bascule bridges worldwide. It is the first moving bridge built in New Zealand for more than 50 years and only the second rolling bascule ever constructed in this country.

Mr Nelson says the biggest project win is that the completed bridge looks identical to the initial design sketches that were made at the beginning of the project.

“It was a particularly exciting project, because we sold an architectural vision and then had to work very hard to build and deliver it to the budget that was available.”

“As to whether or not the bridge is an icon, as architect Martin Knight said, that’s up to the community to decide. We’ve created something unique and beautiful that the people of Whangarei have been hugely interested in. We’d love it to be considered iconic,” he says.