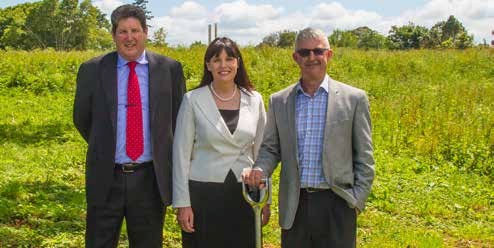 The new building will be the fourth constructed on the Park’s campus since it opened its doors in February 2004.

The new two-storey, 3500 sq m building will house Tetra Pak’s New Zealand headquarters and design team, in addition to a workshop for its technical service team.

The food processing and packaging company currently operates from Waikato Innovation Park in a shared office building, and employs 100 staff. The company moved into the Park in September 2009.

“The Asian and Chinese demand for dairy products from New Zealand continues to grow, which means growth for Tetra Pak as we help New Zealand dairy companies to realise their export plans,” according to the most senior Tetra Pak director in New Zealand, and site manager of the Hamilton office Chris Morgan.

“We are pleased to continue our tenancy at Waikato Innovation Park, which has served us well during the past five years,” Mr Morgan says.

“Tetra Pak’s move into a new building is exciting for us here at Waikato Innovation Park because it means we get to help an existing client with their expansion. Seeing our tenants progress and grow is what we are all about. And we’re always pleased when we are able to provide options as our tenants grow beyond their initial space requirements,” he says.

“The move for Tetra Pak also creates room for expansion for our other growing tenants within our campus, and makes room for new tenants as well.”

Mr Gordon says the company plans to break ground by March 2015 and open the building in December.

The new build will be undertaken with the preservation of Waikato Innovation Park’s natural environment in mind.

The Park houses more than 40 companies employing more than 400 people on site. More than 80% of the Park’s companies are exporters, and collective earnings were in excess of $160 million in 2013.