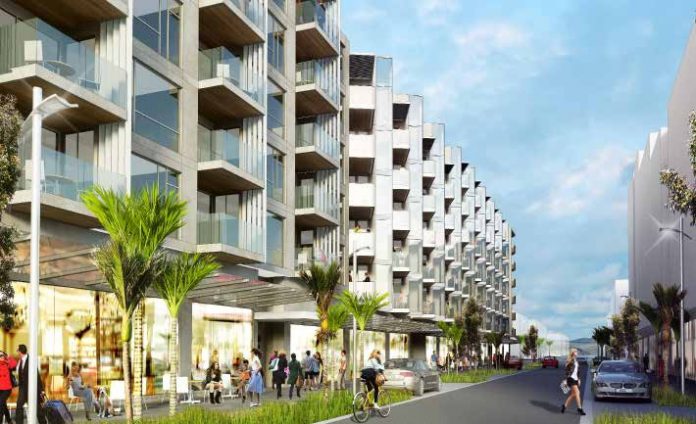 Construction activity in Auckland continues apace, with the start of construction on the Albany Rose Gardens apartments — the largest residential development in the country.

Mr Yu says the aim of the Rose Garden Apartments is to create a brand new community of high standard quality, convenience and stylish design at an affordable price.

The first stage of the development, due to be completed in 2016, includes 201 residential units, 10 commercial units, three live/work units, communal gardens and a new road with 20 additional on-street car parking spaces.

Mr Joyce, also an Albany resident, has been watching the development with interest.

“The simple reality is for this city to keep growing, we need all types of houses. And we could save ourselves a lot of energy if we resolved that projects like this are a very big part of the answer.”

Mr Joyce thanked Mr Yu for their investment in New Zealand, saying “it is a vote of confidence in the New Zealand economy to see them investing here and providing opportunities for more housing in Auckland”.

“Auckland is our bid at the table of Asian Pacific cities alongside the Singapores, the Shanghais, the Sydneys and the Melbournes. So it is important that we continue to invest in this city,” Mr Joyce says.

Sir Don McKinnon — after whom Don McKinnon Drive in Albany is named — says when he came to Albany some 50 years ago it was covered in grass, sheep and cattle.

“One of the big issues we had when development started was where were the kids going to graze their horses?” he says.

Sir Don campaigned in the 1960s for the Albany basin to be a place for “residential living, employment and recreation.”

He is pleased to see this development taking place, saying that “when you see development, when you see cranes, when you see bulldozers, what you are seeing is things that are happening and people being employed. And that’s all very exciting. We’ll watch with interest as the planned 832 apartments go up”.

Context director Stephen Voyle says the development delivers on the District Plan’s intensification drive in Albany, meets the council’s desire to increase the vitality and viability of the area, and helps address the housing shortage and affordability problems in Auckland.

The China Nanjing Dadi Construction Group had a turnover of NZ$4 billion in 2014, and sits in the top 100 of the top 500 companies in China, with investments across Europe, Asia and Africa.

Mr Yu says with Auckland being voted one of the top three cities in the world to live and work in, it gave them confidence to invest in the city.

The residential units offer a diverse range of living environments, from one to four-bedroom apartments, all with balconies and good access to sunlight and views.

Apartment prices start at an affordable $400,000, tackling the housing shortage head on.

Extensive landscaping and outdoor living spaces are integrated into the development, which is within easy walking distance to the rest of Albany and public transport links.