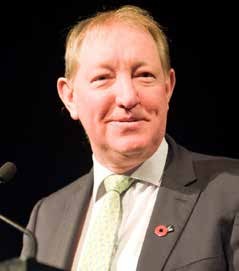 The first week of Jul y saw Registered Master Builder members from all over New Zealand gather in Hamilton for their annual conference, themed “Lest we Forget”, in recognition of the worldwide commemorations of 100 years since the Gallipoli landings in World War I.

Opened by Association president John Macdonald, proceedings were kicked off by an address from the Minister for Building and Construction the Hon Dr Nick Smith.

The Minister acknowledged the appointment of RMBA chief executive David Kelly, noting the valuable link between the sector and Government. He shared the Government’s three priorities for construction, those being growing supply, improving affordabilit y and maintaining quality.

He then took the delegates through a number of initiatives on the Government’s radar aimed at addressing these. Dr Smith also acknowledged the Government’s belief that home ownership is good for society, leading to greater stability for families who, in turn, take better care of their homes and are more likely to get involved in their local community.

For the next hour, attendees were incredibly privileged to hear an address by Corporal Willie Apiata VC, during which you could have heard a pin drop.

From his humble beginnings to the life changing moment in Afghanistan that ultimately thrust him into the public eye forever,

Mr Apiata shared his story with an enviable honesty and, at times, great humour. He allowed his medals to be handed around the room, saying that the people who touched them passed on their mana to help him share the burden and the responsibility of what they represent.

He was emphatic that his biggest hero is his Mum, and that one of his proudest moments was when his son wrote him a letter asking him to come to his school to tell his story.

It was impossible not to be affected emotionally by this man’s incredible journey, and the fact it is difficult for him to share it — but he does so with a very lucky few. To catch a glimpse of what he’s been through, and the intense meaning of the camaraderie he built during his years in the military, was awe inspiring.

We were also very fortunate in that he spent a very long time meeting and chatting to our builder members afterwards — an experience that no one there will ever forget.

The rest of day one was packed with informative workshops and business sessions, including Playing the Building Act Game by Rosemary Killip, who was not afraid to ask the hard questions of builders and their competency.

Keeping Your Clients Happy by Ross Gilmour gave insights on the right questions to ask to ensure you recognise the differences each of your clients have in order to ensuregood relationships.

After a bit of a hiccup with the venue for the GIB Partners Tour, the ladies were treated to lunch, wine tasting and a fashion show at Coopers out at Mystery Creek.

The afternoon was then rounded off with the ITM Welcome Function which involved a visit to the fantastic Hobbiton movie set in Matamata.

This was followed by drinks and nibbles at the Green Dragon Inn — featured in The Lord of the Rings film trilogy as the local meeting place for all the residents of Hobbiton — followed by a meal and entertainment in their purpose-built, themed marquee.

Day two star ted off with a fantastic presentation from inspirational speaker Cam Calkoen, who was born with cerebral palsy and has, in short, set about ensuring he has an “awesome” life. Far from being confined to a wheelchair and being told he “can’ t do that ” — as was his fate according to the medical profession — Mr Calkoen has become the consummate over-achiever.

He shared how he went from the egg and spoon race at school (with a little help from his Dad) to representing New Zealand in athletics. He’s won numerous awards for his work in bettering the community, was the figurehead for a $4 million community facility project, and has just recently, through unstoppable persistence, broken into the USA speaking circuit after a few knock backs.

Today, through his Carabiner Mentoring programme, he motivates people with universal backgrounds to dream big, because with big dreams comes a big life!

The workshops on day t wo included The Affordable House of the Future by Mark Southcombe, who shared with residential builders the history of prefabricated housing in New Zealand and around the world, and gave insights into one of New Zealand’s key issues affecting construction.

Offsite Manufacturing by Kevin Stanley took the commercial builders through a number of his company ’s projects, outlining their philosophy and build processes, and the resulting efficiencies gained with offsite manufacturing.

H&S Reform; Where the Rubber Hits the Road by Mike Cosman was a plain English, no-holds barred explanation of the new reforms that will be coming into play in New Zealand soon.

The formal conferencing sessions concluded with Mark Weldon, chief executive of Mediaworks, former chief executive of the NZ Stock Exchange and owner of Terra Sancta Wines.Mr Weldon shared many insights into the businesses he’s been involved in and the keys to their success. Interestingly, his view is that, on many occasions, a business will fail because they concentrate too much on their product and not enough on the actual market they are in.

For example, in the seven years he’s been in the wine business, four out of six of his neighbours have lost their vineyards and, in some cases, their houses. This was all due to being too “product-centric” and ignoring what the market wanted.

Apart from his own business, the other two have survived by diversifying— providing a product the market wants and, in one case, ignoring the wine critics — a good lesson there.

Later that night the PlaceMakers Gala Dinner started with a bang — and a few sirens, smoke and soldiers — as guests were ushered into the military-themed Claudelands Events Centre.

Just by coincidence, there was another battle scheduled for that night, being the Super Rugby final — so that was the first round of entertainment for the evening.

Following this, the fabulous Beat Girls treated the guests to an Anzac-themed set followed by their usual, high octane per formance guaranteed to fill the dance floor.

All in all it a very good couple of days, and thanks go to the Waikato Branch for hosting their RMBA comrades in their home town.

2015 AGM The RMBA AGM was held at the Novotel in Hamilton just prior to the conference. Chief executive David Kelly presented a look back over the year, and also what ’s on the horizon. Remits for approving the accounts and increasing the Directors fees were passed, as well as confirming the Semi -Retired category as a new category in its own right.

• Next year’s RMBA conference will be held in Christchurch.